Thailand and China have kept an unblemished win-loss record to top their respective pools at the preliminary round of the 3rd AVC Cup for Women held at the Baluan Sholak Sport and Culture Palace on Wednesday. 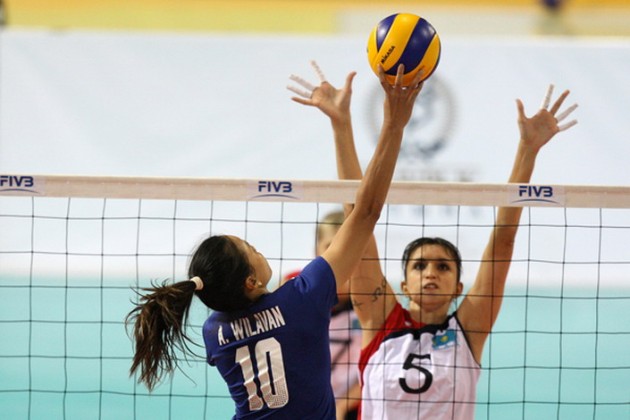 “This match was critical and full of risks,” coach Hong said. “If the girls showed a little bit of weakness in the end, we could have lost the match again.”

“The Chinese Taipei players are confident in their strength and they are ready to gather more strength for their quarterfinal match.”

Vietnam surfaced with a brief but more proficient way to end the match in another tight fifth set battle against Japan (20-25, 25-23, 17-25, 25-13, 17-15). The first two sets was meant for each team to establish control – as they prevented each other to advance to the closing sets with a small deficit.

A total opposite of this happened in the third and fourth sets as both teams already showed signs of exhaustion and allowed a much bigger advantage in their respective wins. When the tiebreaker ensued, an absolute winner was hard to determine as nail-biting moments followed.

“The significant traits that were key to our victory in the final set were the strong relationship my players had on court and the involvement of the Vietnamese supporters who came to the competition hall to cheer for us.”

China clearly dominated the match against Iran in straight sets (25-16, 25-10, 25-10). China’s concentration was at an absolute best as the six players on court were solidly playing until the final whistle was blown.

Chinese setter Mi Yang had good ball distribution allowing all her teammates to get involved in the offense. As their main players Wei Qiuyue and Wang Yimei watched from the side-lines, the younger players did not need any veteran reinforcements because they were already having a good control of the match.

Coach Yu Juemin stated that this is something that he has been working on to give his other players the right amount of exposure in the game, and to give some break for his main players so that they could recuperate from injury.

“Wei Qiuyue and Wang Yimei have not been playing in the matches because we are trying give them time that is needed to fully recover from their injury.”

Southeast Asian powerhouse Thailand saw off Kazakhstan 3-1 (23-25, 25-22, 25-23, 25-21). The hosts started off strongly and secured the victory of the tight first set but eventually passed on the momentum to Thailand in the succeeding sets.

Onuma Sittirak was unstoppable in scoring as she gained 26 points – 25 points coming from strong spikes. Onuma’s spiking proficiency dislodged the Kazakh defence. Although the Kazakhs blocking output was tremendous which recorded 14 points, Onuma’s offensive presence at the net was overpowering for the taller blockers of Kazakhstan.

Nootsara Tomkom’s crafty setting skills allowed her teammates to run a balanced offense, which carried them on in the most critical moments of each set.