The Dominican Republic Olympic Committee president praised the women’s volleyball program of his country after welcoming the team that won the gold medal of the first U-23 Pan American Cup in Lima, Peru. 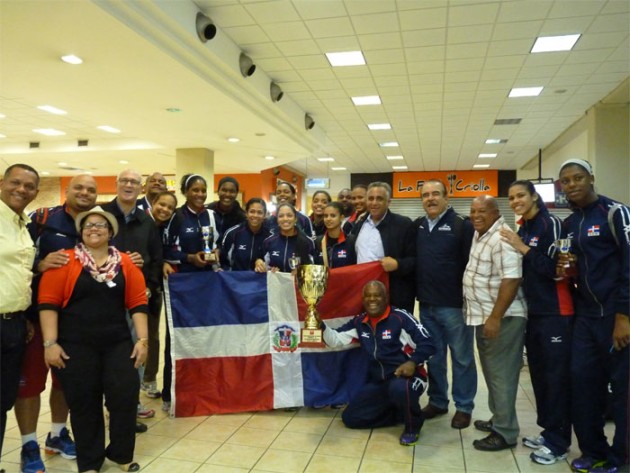 Luis Mejia Oviedo was at the Las Americas Airport to receive the Dominican delegation that arrived in Santo Domingo on Monday. He was accompanied by Antonio Acosta, the General Secretary of the DR Olympic Committee.

“Once again the female Dominican volleyball represents our country with honor at an international competition,” Mejia Oviedo said. “It is my pleasure to congratulate all the members of the team and the coaching staff.”

“Women’s volleyball has become like a trademark of our country due to their winning consistency,” he added. “The success of the program is evident following the victories at different age-group events.”

The Dominican Republic recently captured the gold medal at the NORCECA Junior U-20 Championship in Managua, Nicaragua and finished second to USA in the U-18 Championship in Tijuana, Mexico. Last April, the senior team won the Olympic Qualification Tournament also in Tijuana.

The Dominican team won the gold medal by defeating in straight to the representative of Brazil. In the semifinal match and beat Argentina in the preliminary phase overcame Canada, Costa Rica and Peru.

The U-23 Pan American Cup was created in both genders in order to provide international exposure opportunity for athletes who leave the junior level and still not have the experience to be part of the senior selections of their countries.

ITA M: What’s next for the Block Devils!