Wilfredo Leon, Bruno Rezende, Simone Giannelli, Matt Anderson, Earvin Ngapeth, Sergio Dutra Dos Santos... Six candidates, but only one can be the Best Volleyball Player of 2016. Who is your favorite? 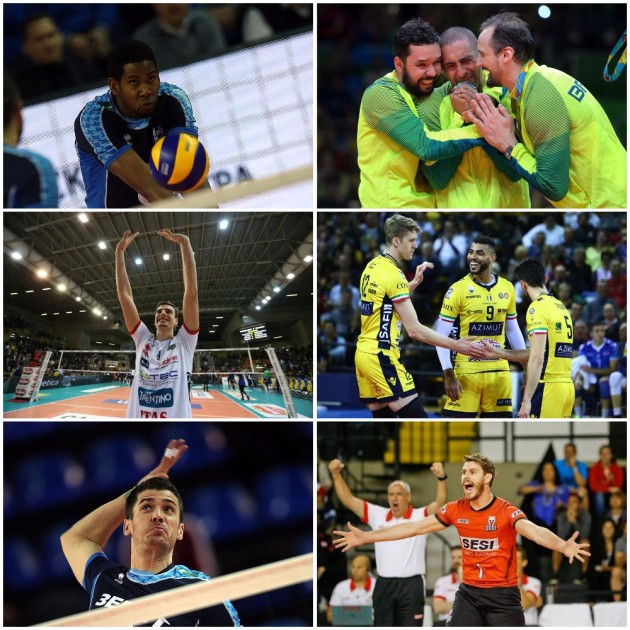 Let us present you the players we have put in our official Poll for the WoV Player Of The Year award.

Wilfredo Leon (Zenit Kazan): Everyone in the world agree that Wilfredo Leon is currently one of the most dominant volleyball players. His jumping ability and spiking power are at the maximum level, while he is able to single-handedly change to flow of the match.

And, he showed it in the 2015/16 CEV Champions League Finals when he played an incredible game and helped his Zenit made a stunning comeback against Trentino. Leon was later named the MVP of the competition. He also won the Russian Championship, Russian Cup and Russian Supercup with Zenit Kazan.

Bruno Rezende (Modena/Sesi-SP): Brazilian superstar had an incredible year. Everything started by winning the Italian Cup trophy with Modena, then Bruno and Co. also won the Italian Championship and brought the Scudetto back to Modena after 14 long years.

Then, he has fulfilled his biggest dream.

Bruno Rezende won the Olympic gold with Brazil at the Rio Olympics, which is definitely the highest achievement any sportsman can  reach. He was the starting setter of Brazil during the entire tournament.

Simone Giannelli (Trentino): Whenever you talk about this guy, you should always have in mind that he is just 20 years old! Still, despite being so young, Simone Giannelli has already picked up plenty of valuable awards, like the silver medal from the Rio Olympics.

In 2016, Giannelli has become the leader of Trentino, while we have no doubt that his best performances are yet to come in future.

Matt Anderson (Zenit Kazan): When you are every single year among the candidates for the best player award, then it is simply not a coincidence. Matt Anderson had one more excellent year, which was filled with various trophies.

He has clinched 4 trophies with Zenit Kazan (CEV Champions League, Russian Championship, Russian Cup, Rusian Supercup), while he also won the bronze medal with the USA national team at the Rio Olympics.

Earvin Ngapeth (Modena): Serie A1 is considered to be the best league in Europe, while Earvin Ngapeth is one of the top players of that competition. The Frenchman has everything a modern volleyball player needs to have. He is amazing both in defense and in offense, while he is often simply unstoppable for his rivals.

Sergio Dutra Dos Santos (Sesi-SP): Legendary Brazilian libero turned 41 two months ago, but his incredible volleyball skills let him still play at the highest level. And not just that – He is often the best player on court while playing at the highest level!

In 2016, Serginho won the greatest possible recognition for any volleyball player. He was named the MVP of the Rio Olympics, while his Brazil won the gold medal. It was simply the perfect way for him to say farewell to the national team after so many years playing in the yellow jersey.

I think Wallace (brazilian opposite) was the best last year. He won everything whit Cruzeiro (inclusive the world cup of clubs – Cruzeiro 3×0 Zenit) and was the best player of Brazil in the olympic games…

Efficiency- Wallace de Souza . Creativity – NGapeth as the most original, unique and innovated receiving spiker… But where is any MB?

Definitely Giannelli. He’s awesome player, incredible. The best setter, but he also could play as an opposite. I love the way he plays. I am telling this as a real fan of good and interesting volleyball.