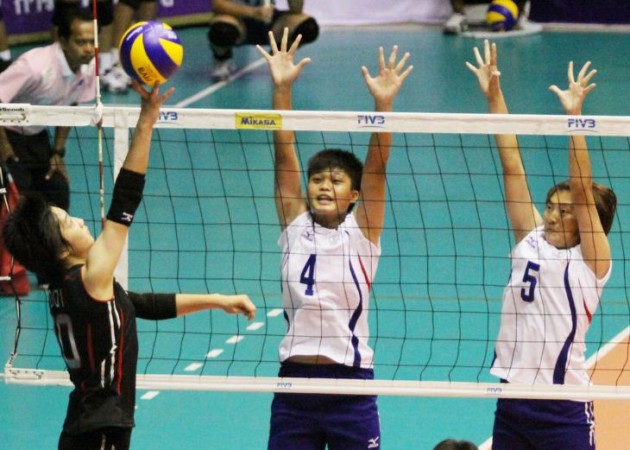 It was sweet revenge of the Taiwanese players, who lost to the same rivals in the 2008 final clash on their home soil. The stunning victory also defied all odds as local enthusiasts earlier predicted that the match would end in three sets in favour of the Japanese.

In the first set, Japan and Chinese Taipei came out in similar style – both displaying their characteristic power-and-speed tactics at the net. The impeccable defence and the never-say-die attitude of both sides made the on-going battle the most thrilling so far in the 16-team tournament.

Initially, the five-time champions Japan got off to a confident start, with hard-hitting Sakura Doi and Aimi Akiyama penetrating the Taiwanese defence with their aggressive spikes to put the team in front 9-4. However, Chinese Taipei counter-attacked well to catch them at 9-9 and then surged ahead 10-9.

From then on, both teams played every part of the game well. As Japan launched a series of fierce attacks, the Taiwanese defence were almost impenetrable.

During the hotly-contested battle, Chinese Taipei’s Tseng Wan-Ling injured her right ankle, but did not want to give up. The spirited spiker overcame her agony to continue the fight, which saw her land on the ground with a distorted face every time she jumped for spiking and blocking. Head coach Lo Chung-Jen allowed her to continue as she became a scoring machine for the team.

Chinese Taipei won a crucial point to lead narrowly at 24-23, needing only one more point to win the set. Japan played cool under pressure to close the margin 24-24 and from then, leads changed hands several times. After a long rally, Japan took the hard-fought thriller 29-27.

Chinese Taipei regrouped for a strong challenge in the second set. Their determination worked out pretty well when they took the set 25-19 before Japan made amends to win the third set 25-18. Chinese Taipei stormed back to clinch the fourth set 25-21 and maintained their poise to win the do-or-die tie-breaker 15-8.

“I’m very happy for the win. Everyone played well. Credits for our win went to Tseng Wan-Ling. Despite the ankle injury, she never gave up. I asked her to leave the court in order that I could replace her with another one. She denied. We just let her do that because we learned she could handle it and our team could beat Japan in this form,” said Chinese Taipei’s Lo Chung-Jen.

“Now, we have to focus on the next round, in which we will take on China and India in Pool F. It’s quite difficult to play China because they are very tall and much stronger than us. However, we will do our best out there,” he added.