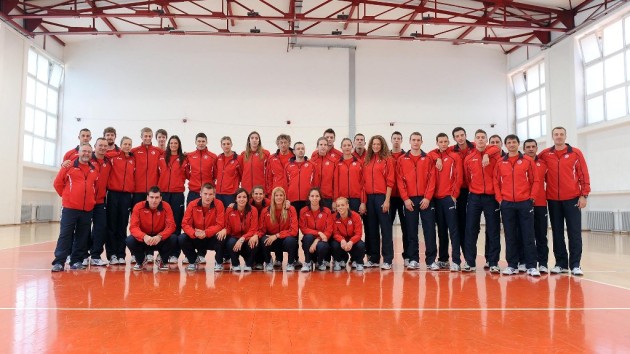 A press conference was held two weeks before the opening match of the 2012/2013 season. Among other things, the team’s targets were discussed in front of many local and national media.

Considering that Crvena Zvezda BEOGRAD is the sole club represented in both genders in the 2013 CEV Volleyball Champions League, returning back to Europe’s top club competition with their men’s and women’s teams for the first time since 2004, a common press conference was held in Serbia’s capital city.

The red and white girls and boys posed together in front of many cameras, having fun at the same time (see picture).

Dusko Nikolic will debut in the CEV Volleyball Champions League after replacing Zeljko Bulatovic as head coach of the men’s team. He recalled that Crvena Zvezda BEOGRAD has enjoyed several glories in the past not simply at home, but also in international competitions.

Crvena Zvezda is not a newcomer in European Volleyball, as the men’s team has been competing in the European Cups for a long time and after their last appearance in 2008/2009 they are back in the CEV Volleyball Champions League.
“We have high ambitions for the CEV Volleyball Champions League. We are aware that this competition is extremely tough. We were drawn to a difficult Pool including Zaksa KEDZIERZYN-KOZLE, TOURS VB as well as TRENTINO Diatec. We can only say that we will fight for every single point even against the strongest opponents” said Nikolic. “We want to finish first in the national league and win the national cup. These were our main goals for the last years and we still want to prolong that tradition. The Champions League is the additional sweetie for us. This is going to be a great experience for our young team”.

It is interesting to note that Crvena Zvezda BEOGRAD did not change anything in their roster and that the same twelve players will play together in the coming season. The most experienced guy is captain Mihajlo Mitic, first setter of the team, who is also a member of the Serbian national team. “It’s a great honor for us and a great challenge at the same time. All the boys are looking forward to the start of the competition” he says. “I hope that the players will do their best to perform at the highest level and live up to the expectations of our fans and sponsors”.