Poland’s PGE Skra Belchatow defeated Zamalek of Egypt 3:0 in Pool B of the FIVB Men’s Club World Championship. Aleksandar Atanasijevic, Mariusz Wlazly, Michal Winiarski and Daniel Plinski were the best in PGE SKRA. Reda Haikal and Mogamed Badawy were the best in Zamalek. 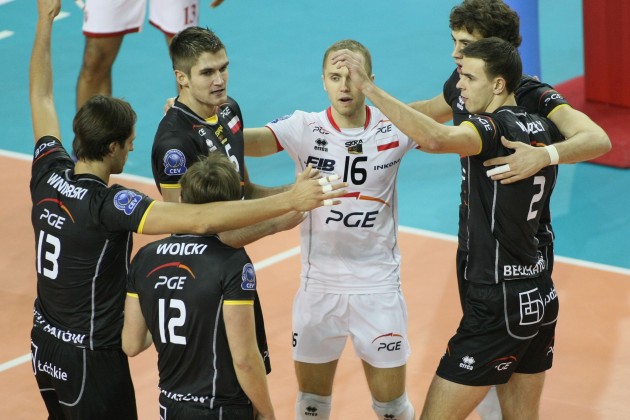 Aleksandar Atanasijevic and Mariusz Wlazly were the best scorers of the winning side with 14 and 11 points respectively. Michal Winiarski added 9 and Daniel Plinski and Karol Klos each contributed 7 points.

Zamalek’s Reda Haikal had a match-high 22 points followed by Mohamed Badawy with 11 tallies.

The Polish club had an 8-4 advantage in blocking but Zamalek had the favorable margin in the service ace department 7-2.

Skra Belchatow led 8-6 with balanced attack in the early stages of the first set. Zamalek reduced the distance to 16-15 relying on the solid offense of Reda Haikel. Atanasijevic broke a tie at 15-all with a cross-court attack from the right side. Seif Elnasr gave Zamalek an 18-17 lead with a floating service ace but Winiarski tied the score again. The scoreboard continued equalized with teams exchanging big blows. Badawy’s spike combined with an opponent error gave Zamalek a 23-21 lead. Atanasijevic and Afifi traded big smashes for 24-22 but Haikel served long. Atanasijevic tied up at 24-all forcing a Zamalek time-out.  Consecutive attacks by Klos and Atanasijevic gave Skra Belchatow the set 27-25.

The red-hot Atanasijevic contributed to a 6-2 start in the second set with three formidable spikes. The Polish club led 8-2 at the first technical time-out. Raikal scored and served for two consecutive Zamalek’s points and then netted his serve. Wlazly planted a spectacular kill and Atanasijevic continued his torrid streak. Badawy scored two straight points and Zamalek narrowed the difference to 12-7. Badawy scored and then blocked Atanasijevic but Wlazly emerged with his spike and Atanasijevic scored from the back row. Haikel came back for Zamalek and Youseef also scored for a 15-12 score. Wlazly planted a devastating spike for the 16-12 advantage in favor of the Polish club. At 21-15, Badawy scored for Zamalek followed by an error of the opponent. Atanasijevic scored three of the last points of the set for his team which took the second 25-19.

Wlazly led a torrid Polish offense to start the third set sending Skra Belchatow to an 8-3 advantage. Haikal landed a missile for Zamalek but Klos was ready to counterattack. At 10-6 Abouelhassan served and ace and Kabary added a kill. It was a battle from then on with the two teams increasing the pressure. Haikal broke a 15-all tie for a 16-15 lead of Zamalek at the second pause. At 18-18, Kooistra crashed his serve into the net but Badawy served long. The attack of Cala was out of bounds to give Zamalek a 20-19 lead and the Egyptian increased to 21-19 after one opponent error. Cala capped a Polish comeback to tie at 21. Haikal and Badawy parlayed spikes for set point at 24-22. Winiarski tipped one off the Egyptian block and the score tied at 24-24. Badawy and Winiarsky exchanged big hits to keep the equalized score. Cala gave Skra the lead 26-25 , but then was blocked by Kabary. Cupkovic gave again the lead to the Polish and the set concluded with an error by Zamalek defense 28-26.

For more news from the Club World Championship click here.