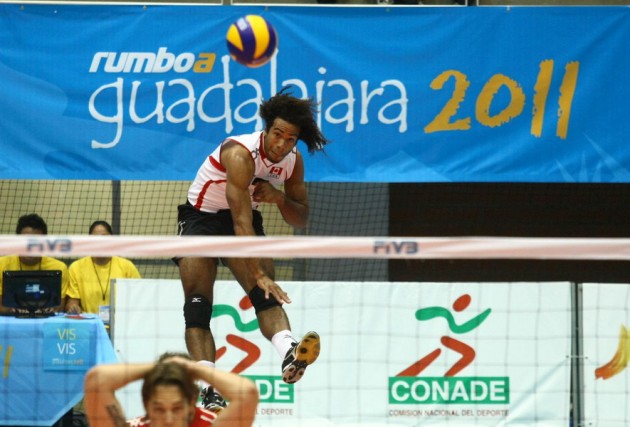 “Being on the national team was always a dream and then it became a passion,” said Gaumont Casias, who played 60 matches for Canada. “I fought hard to get on that team. I didn’t have the best hands but I worked hard and made it.”

Casias, a leftside player, first wore the red and white during an exhibition tour in Winnipeg in 2004 against Argentina. Since that first selection in 2004, he has been a member of Team Canada up until the conclusion of the 2012 World League.

He returned to the Canadian lineup during a European Tour in Estonia and helped the Canadian team to a first place finish at the event following a long absence that saw him miss both the 2011 Pan Am Cup and first leg of World League qualification due to injuries.

“Once you are with the national team you are hooked for life,” said Gaumont Casias, who also enjoyed a successful professional career in Europe. “It was the collective effort that made it such a great experience to be on the team.”’

Gaumont ended his career with Team Canada in Finland at the 2012 World League in which Canada defeated Finland and secured its spot in the World League competition for 2013.

Meanwhile, after 12 seasons with the Canadian national program, Brock Davidiuk of Edmonton has also announced his retirement from Team Canada’s men’s volleyball team.

“My time with the Canadian team was an incredible ride,” said Davidiuk, 29. “To have set my mind to something from a young age and then accomplish it brings me great personal pride.”

He then competed for the Senior National Team for the first time in 2004 and was an integral part for the rest of his career. As captain of the 2009 squad, he led his team to a berth in the 2010 FIVB World Championship in Italy at the NORCECA World Championship Qualification tournament.

In 2011, he helped the earn a berth for the 2012 World League Qualification tournament through finishing 3rd at the 2011 Pan Am Cup in Gatineau, QC. Canada eventually made the World League tournament for the first time in five years.

“The experience with Team Canada and the people I met have shaped me as a person and for that I’m grateful,” he said.

Davidiuk was also as successful with the University of Alberta Golden Bears as he won the CIS Championship, was named CIS All-Canadian, CIS Championship MVP and Athlete of the Year.

Following his collegiate and university career, Brock joined Team Canada’s Full-Time Training Centre in Winnipeg where he trained for the year prior to being selected to the FISU team that finished second at the 2007 Universiade Games in Bangkok, Thailand, tying Canada’s best finish ever at these Games.

Brock concluded his career with 41 international matches for Team Canada, while also playing professional volleyball overseas for a number of years.

He will now direct his energy to his company Grass Roots Volley that focuses on running position and skill specific clinic for volleyball athletes in Alberta.

“I’d like to thank all my teammates,” he said. “And through the years all those behind the scenes. And I’d also like to thank my unwavering number-one fans and lifeline through it all, Mom and Dad.”

A third player, Calgary’s Jeremy Wilcox, also announced an end to an outstanding volleyball career, confident that Team Canada is going to continue its climb in the international standings. Wilcox played 42 international matches for Canada. His final match with the senior national team was a victory over Slovakia in 2011 at the World League qualifier that advanced Canada to the second leg of qualification in its eventual return to the World League in 2012.

“What I enjoyed most about my last years was being able to participate and witness Glenn Hoag’s (Canada’s head coach) vision take shape and begin to achieve the results it wanted,” said Wilcox.

“I’m grateful to Glenn for the positive changes he instilled in me with regards to competitiveness, work ethic, teamwork and leadership. Those changes will stay with me for the rest of my life.”

The 33-year-old setter won the gold medal in his Team Canada debut in 1998 at the U21 Junior NORCECA Championship. He was also on the fifth place team at the 1999 world juniors and fifth place squad at the 2001 World University Games.

As a member of the Senior National Team he helped Canada to a seventh place finish at the 2007 Pan Am Games, second at the 2008 NORCECA Championships and fourth that same year at the Continental Olympic qualifier.

Wilcox played university volleyball for the University of Calgary Dinos between 1996-2000. During his time with the Dinos he was a two-time second team all Canadian and received the Dino Merit Award (Athlete of the year).

He was also on numerous professional volleyball teams over the years
Wilcox recently started working as a management consultant at Grande Portage Resources LTD.