Plovdiv, Bulgaria, January 17, 2012. The women’s team of Maritza PLOVDIV achieved a historical success by winning its first ever national cup of Bulgaria. And it did so in an impressive fashion without losing a single set throughout the entire tournament. 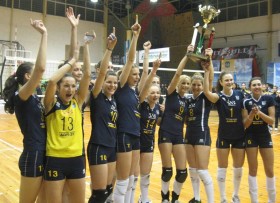 With hundreds of fans cheering the Yellows from the stands of a fully packed “Olimpiada” sports hall in Plovdiv, Maritza managed a convincing 3:0 (25-18, 25-20, 25-14) victory over traditional powerhouse Levski Volley SOFIA in the final match of the 6-day Kupa Bulgariya tournament to triumph with the trophy.

Before making it to that decisive game, Maritza made a clean sweep of Pool A and then dethroned incumbent cup holders CSKA SOFIA with a 3:0 (25-23, 25-21, 25-18) win in an exciting semifinal.

In the other semifinal, Pool B winner Levski also secured a straight-set victory over Slaviya-SU SOFIA.

It is a rare occurrence that Kupa Bulgariya goes to a team from outside the capital Sofia.

In fact, it has happened only four times in the 54 editions of the competition with Maritza being only the third non-Sofia club ever to join the list of cup holders.

Her teammate Ivelina Monova was honored as Best Libero of the competition, while Levski Volley took the other two individual awards – Petya Barakova for Best Setter and Viktoriya Grigorova for Best Spiker.

“It feels like a dream, I don’t even know how to express how happy I am at this moment,” an excited Malinova said.

“We owe a lot to the fans who contributed greatly for this success and I would like to thank them for their support”.

“Winning the cup is a great achievement by itself, but I also view it as another step of the ladder that we have been climbing over the recent years” Maritza head coach Ivan Petkov said in an emotional statement upon raising the trophy.

“We celebrate tonight and resume work tomorrow with our next goal being the national championship title in March. Our long-term objective is to become a team of a higher European level”.
The mid-season break in the National Championship is coming to an end and Maritza is going to welcome Levski to Plovdiv again as soon as this coming Friday, January 20.