Friedrichshafen, Germany, January 16, 2012. Initially it was just hope, now it has turned into reality: when VfB FRIEDRICHSHAFEN welcomes Zenit KAZAN on Wednesday night, the duel between the German and the Russian champion will be a battle for the top position in prelim Pool B of the 2012 CEV Volleyball Champions League. 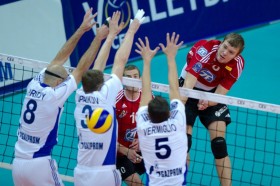 FRIEDRICHSHAFEN needs a three-point-victory (means 3:0 or 3:1) to overcome the Russians.

“We should not pay attention to that, but concentrate on the possibility to play against a strong team like KAZAN”.

Nevertheless he believes in a chance for his team.

“It is always possible to win”, so Moculescu.

“We play well and are in a good shape”.

For sure KAZAN is one of the strongest teams in Europe and includes a lot of Volleyball stars – namely Italian top setter Valerio Vermiglio, one of the world’s best opposites Maxim Mikhailov, the Russian national players Yury Berezhko, Alexander Volkov, Evgeny Sivozhelez and Nikolay Apalikov and the US-American William Priddy.

The team travelled to the Lake of Constance by its own plane and with a group of 27 persons; compared to that force the German champion seems quite moderate.

Sure is also that the host needs an extra-ordinary performance to win the battle of “David against Goliath”.

“The service will be important – especially if you are physically underestimated”, says Moculescu.

“We need to keep the players of KAZAN away from the net”.

That means: the Germans shall serve with so much pressure that the Russian reception gets problems and Zenit play cannot be too fast anymore.

FRIEDRICHSHAFEN captain Joao José knows exactly what his coach is talking about.

On the net he – with a height of “only” 1.94 m – has to play against opponents that are much taller than 2 meters.

“I have to play quicker and more intelligent – and I have to jump 50 cm higher than them”, he says and adds: “I hope that we play our best match during this Champions League not only for us but also for our fans”.

CEV CL: CSKA SOFIA ready to challenge the leader of Pool A