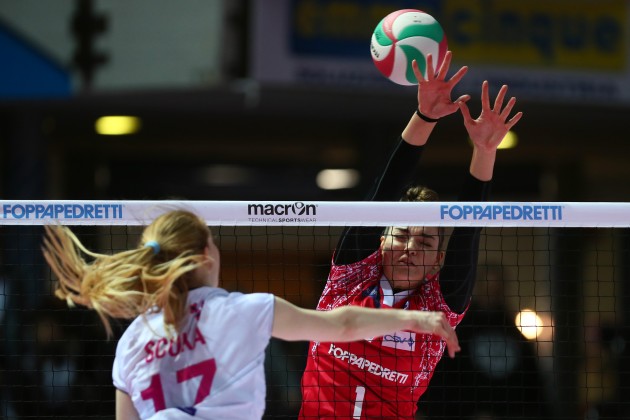 After many confirmations and new arrivals, Zanetti Bergamo have renewed a contract with the Croatian blocker Ema Strunjak. For the 18-year-old player, this is a good news since that she is still young.

Spanish receiver joined Cajasol for the upcoming 2018/2019 season. This young but very talented player has only 17 years and in the next season, she will debut in the best Spanish league.

“This will be a new step for me. I like this team and for sure I will be able to learn something new and progress as a player and a person. I’m very happy” said Antia Vallecas who is a member of the Spanish National team U 19.

From Poland came news which for sure we all already knew, Malwina Smarzek leaves Chemik Police. As they announced, she will not be their player in the 2018/2019 season. She played for the Polish champions two last seasons and won two championships and Polish Cups. Last season she was named for the Best player of the Polish Cup.

“Mali, thank you for representing the Polish champion, you’ve been a very diligent girl who developed her wings in Police, we wish you success in the future,” people from Chemik wrote on their website.

On the other side, Grot Budowlani Lodz got a new player. They have hired Oliwia Urban who last three seasons spent in Pila.

“I am glad that I will be able to develop in such a good club and I am looking forward to new challenges in the upcoming season,“ said Olivia.

PAC W: Colombia and Puerto Rico will play for a ticket at Pan American Games