Tauron MKS DABROWA GORNICZA will be playing in a couple of days PTPS PILA in the 1/4 finals of the national cup with the ambition to eventually retain last year’s title. In the other 1/4 finals Aluprof BIELSKO-BIALA plays Impel WROCLAW, Atom Trefl SOPOT will test out the likes of KS Palac BYDGOSZCZ. 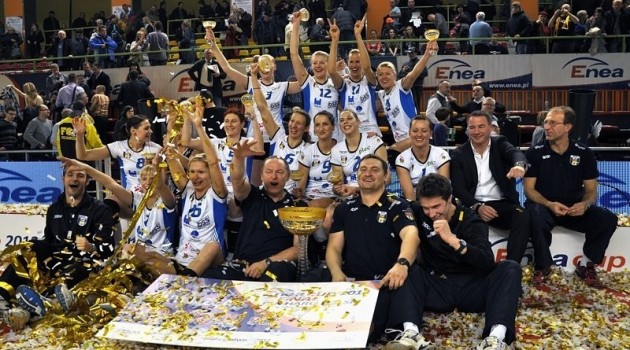 This past season the players mentored by head coach Waldemar Kawka started their campaign by edging Impel Gwardia WROCLAW in straight sets thereby making it to the final four where they crossed their ways with Bank BPS Fakro MUSZYNA in the semis. That clash turned into a drama with Tauron MKS eventually having the upper hand at the tie-break to play Atom Trefl SOPOT in the last act of the competition. Though they were once more the underdogs, Tauron MKS cruised to a 3:1 win to claim the title. “This time we play two matches with PTPS PILA and we need to stay very concentrated” outside hitter Elzbieta Skowronska says. “Though I understand the challenge that we are about to face I am confident in the value and strength of our team”.

Tauron MKS and PTPS PILA have already played each other this season in the national league with Tauron scoring first a 3:1 win before losing the re-match (2:3) to the young but motivated side around head coach Miroslaw Zawieracz. “We did not play that good in our last match with PILA and anyway we do expect a couple of tough matches. PTPS PILA will do their outmost to make it to the final four as the city will host the event this coming March 9-10. We have a tough task ahead of us but I believe in our chances to make it through” Skowronska stresses.

The player to watch out for shall be Serbia’s Tijana Malesevic who is the best scorer of PTPS PILA and is known for her abilities from the serving line. Another tough opponent shall be Malgorzata Lis – who previously played for Tauron MKS and is an excellent blocker.

In the other 1/4 finals Aluprof BIELSKO-BIALA plays Impel WROCLAW, Atom Trefl SOPOT will test out the likes of KS Palac BYDGOSZCZ while the finalist of the 2013 CEV Volleyball Cup, Bank BPS Fakro MUSZYNA, has already claimed – in straight sets – the first game with Eliteski AZS UEK KRAKOW.