After losing to the four-time club world champions of TRENTINO Diatec to firmly keep third place in the standings of the national league, the guys of Copra Elior PIACENZA will focus exclusively on the CEV Volleyball Challenge Cup this week as they play Dukla LIBEREC in the semis. 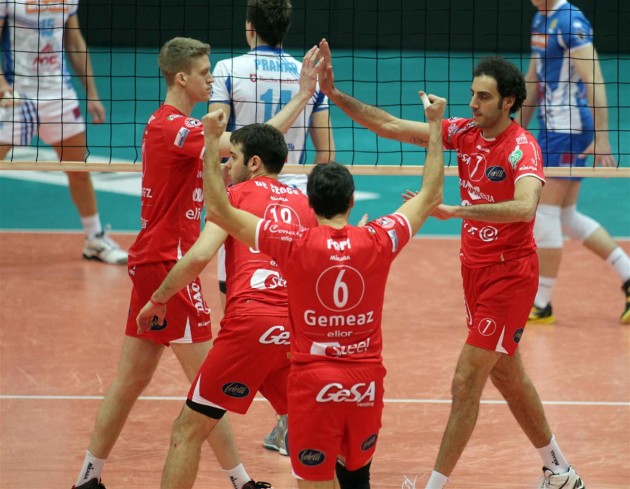 “We got one point from this match with TRENTINO and this has spread around a good mood in our group” head coach Luca Monti says. “However, we shall remain focused as on Wednesday we play the first semifinal match of the Challenge Cup against Dukla LIBEREC. We first play at home and we do have to pay the right respect to our opponents from the Czech Republic. Since we do not have much time and many opportunities to scout videos of our opponents in this competition, we have to show even more determination right from the start. We shall get off to a flying start to impose our pace and pressure our opponents. We shall not forget that an eventual golden set would be played in Liberec, but our intention remains to go for two wins to advance to the final”.

After easily edging Stroitel MINSK of Belarus in the previous round, Copra Elior is only one step away from making it to the last act of the competition to play there the winner of the other semi that features Russia’s Ural UFA and Delecta BYDGOSZCZ of Poland. The first match with Dukla is coming up on Wednesday at Palabanca and after that the players and the coaching staff will travel straight to the Czech Republic for the return game scheduled for this Saturday, March 2. The first goal of the Italians is to score a home win and possibly avoid the risky golden set.

Czech head coach Michal Nekola will line-up the same players who contributed the win whereby Dukla edged Maccabi TEL AVIV 3:1 in the 1/4 finals. The group is chiefly composed of young Czech players with the only exceptions being US American spiker Ryan Burrow and Canadian middle-blocker Adam Kaminski. So far Dukla could comfortably cruise through the previous rounds with 6 wins in straight sets (over TILBURG STV of the Netherlands, Bulgaria’s CSKA SOFIA, and two home matches with Vojvoidina NS Seme NOVI SAD and Maccabi) plus two 3:1 in the away fixtures with their opponents from Serbia and Israel.

Copra Elior PIACENZA has not lost any set so far since the start of the season and head coach Luca Monti will most probably opt for his usual starting six with Argentinean setter Luciano De Cecco, opposite Alessandro Fei, wing spikers Hristo Zlatanov and Samuele Papi, plus middle blockers Maxwell Holt and Robertlandy Simon, and libero Davide Marra.