POL W: SOPOT makes it to semis of national league to play there CEV Cup winners

Atom Trefl SOPOT recently made it to the semis of Poland’s national league with the last quarterfinal match against PTPS PILA being literally one-sided as last year’s national champions imposed their supremacy, especially in blocking, where they registered 13 in the end vs. only one for their opponents. This and other volleyball news read on Worldofvolley.com. 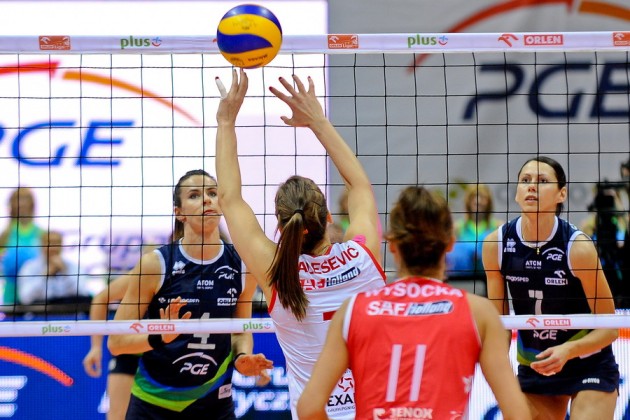 “We wanted to advance to the semis and achieve this goal as quickly as possible. This was shown by our game today as we were really determined to win” Atom Trefl team captain Izabela Belcik said after the game. Ukrainian-born middle-blocker Yuliya Shelukhina was named MVP of the game as she top scored for her side in this winning effort.

In the semis SOPOT will play Bank BPS Fakro MUSZYNA as the winners of the 2013 CEV Volleyball Cup did claim the third match of their series with KS Palac BYDGOSZCZ. It will be a remake of last year’s Championship series where SOPOT cruised past after four matches to claim the title for the first time in their history. In the second semifinal Tauron MKS DABROWA GORNICZA will be playing BKS Aluprof BIELSKO-BIALA.

“We have some tough matches ahead but we are very motivated as we play our archrivals from Muszyna” Belcik stresses. “It won’t be easy to retain our title from last year but we keep calm and I can assure our fans that we’ll fight for each point”.