A few days ago has ended up prestigious plebiscite organized by Strefa Siatkówki where volleyball fans could chose in their opinion the best players in few categories. 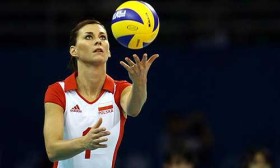 For the best Polish female volleyball player Polish fans have chosen Katarzyna Skowrońska-Dolata. The popular Kasia won the contest for the third time and this year she has beaten such good players as Małgorzata Glinka-Mogentale, Milena Radecka, Paulina Maj, Berenika Okuniewska and Karolina Kosek.

For the second time in the row the prize for the best male volleyball player has won Bartosz Kurek. Kurek didn’t give his opponents even the little chance for the victory and defeated among other Krzysztof Ignaczak and Michał Kubiak, who have taken the second and the third place.

The best foreign female volleyball player became Debby Stam-Pilon. The Dutchwoman has enjoyed the absolute triumph, just like the year before.

This time the readers of Strefa Siatkówki decided that Stam-Pilon deserves for the title more than Neriman Ozsoy and Caroline Wensink.

In the category “The best foreign male volleyball player” won the Italian – Michal Lasko, for whom this is the first season in PlusLiga.

Lasko in his category was unrivaled and defeated with big advantage the two French – Antonin Rouzier and Stephane Antiga. The next places took Gyorgy Grozer, Jurij Gladyr and Lukas Divis.

Certainly the triumph of Andrea Anastasi in the category “The best coach of 2011” can’t be a surprise. The Italian has scored three medals with Polish men national team – two bronze: one in the Final Eight of World League and the second one on the European Championships, and the silver one in World Cup. Andrea Anastasi defeated Krzysztof Stelmach who took the second place with the difference of over 70% of the votes.