Brazil defeated Poland in five sets in their second match of 2013 FIVB World League, giving the fans in Lodz a real thriller. On the press conference the participants of the match Andrea Anastasi, Bruno Rezende, Bernardo Rezende and Marcin Mozdzonek have brought up their opinions. 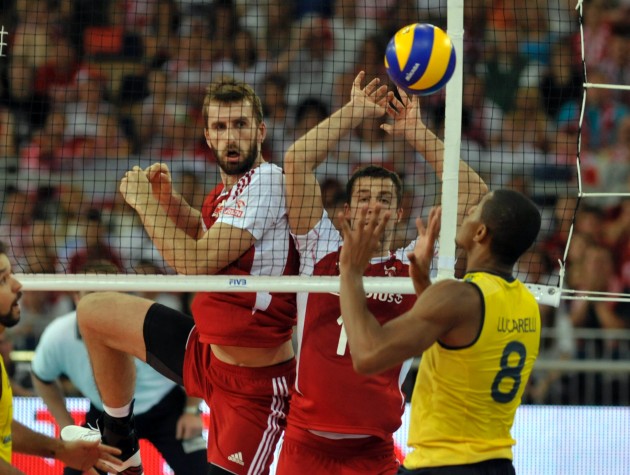 Poland’s captain Marcin Mozdzonek said,  “Once again I want to congratulate Brazil. They were better than us, again. Tonight’s match was a little weird and we had many swings in our play. We made a lot of simple errors, which is normal in this stage of the season, but it was still too many. There is a positive, though. We fought tonight, we showed determination. Brazil started the tie-break better than us, and we were unable to catch them.”

They won, but Brazil made 42 unforced errors, which did not stay unnoticed by the captain, Bruno Rezende: “It was a very tough fight. We made many mistakes, too many for playing against a team like Poland. If we want to get to the Final Six, we can’t play like that, we can’t make so many mistakes,” said Rezende. “We knew that winning two times in Poland would be very difficult because we lost so many times last year. But we are very happy that this group, these young players, won.”

Poland’s head coach Andrea Anastasi was optimistic despite the outcome: “Today was better than on Friday, and I am happy about that. We are not in the best shape yet, but we are on our way there,” he said after the match.

“It was a great fight. It is a good experience for both teams. But 42 mistakes is an amazingly high number. It is important for our young players, like Isac and Lucarelli, to play in such an atmosphere. The bad news is that Lucas Saatkamp, one of our best players, pulled a muscle and he will be out for the next few weeks,” said Brazil’s head coach Bernardo Rezende.

ITA W: Mencarelli – “Some players had only few days of training“