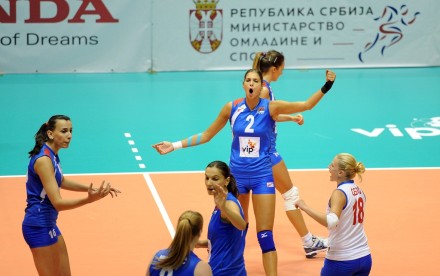 While Poland have lost their last four World Grand Prix matches. They can lose five in a row for the first time since 2008, when they equaled their record losing streak of eight, previously set in 2006.

In the second set, Serbia remained the starting lineup. Poland and Serbia had a tie at 10-10. Poland led the team by 16-14, thus entering the second technical timeout.

In the end, Brizitka Molnar put the Poland into the winning position by serving an ace at 25-20.

The third set witnessed the strategy changes for Poland. In the beginning, Poland was one point ahead of Serbia by 5-4. Molnar’s attack was blocked, thus Poland entered the first technical timeout at 8-7. After the second technical timeout, Poland first entered the game point with strong power and ended the third bet at 25-22.

In the third set, Serbia first entered the second technical timeout, with service out and spiking out by Skowronska. In the end, Mihajlovic’s strong attack consolidated Serbia’s winning by 25-21.

GP: Parisi – ”I’m not happy with the way my team played”