CL M: Battle of Poland to start in Jastrzebie-Zdroj

Two teams from Poland are about to cross their ways with a ticket to the Final Four Tournament of the 2014 CEV DenizBank Volleyball Champions League – Men at stake. JASTRZEBSKI Wegiel and Asseco Resovia RZESZOW are set to play each other on Wednesday before the return game follows next week at the Podpromie sports hall in Rzeszow. 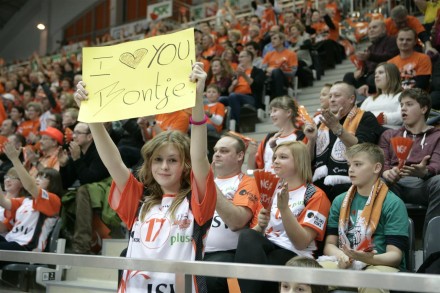 “I expect that the hall won’t be full, but more than full” says JASTRZEBSKI Wegiel head coach Lorenzo Bernardi. “This is the most important game this season so far. We really need the support of our fans. We expect a great atmosphere which shall turn into an advantage for us” he adds.
The Italian-born coach – who is also the Volleyball Player of the XX Century – can be sure that the local fans won’t disappoint him. Similarly to the previous home matches with Halkbank ANKARA and TOURS VB, the club has invited their supporters to flock to the sports hall and wear the orange outfits that JASTRZEBSKI Wegiel is known for.
The ambiance at the Hala Widowiskowo-Sportowa will be great especially since the fans of these teams are very close to each other.

The good news for JASTRZEBSKI are related to the comeback of their team captain Michal Lasko who was out due to injury for six weeks but was back in action for the game in Warsaw where he was included in the starting six and registered 13 points.
“It was very uplifting but the team has showed that they can play great matches even without me” Lasko says. “Our head coach has many different options in attack. As for Wednesday, I think that small details will decide the outcome of our match with Resovia.”

ITA M: 15th round in numbers – Stellar attacking from Lube