The return semifinal game for the 2014 CEV Volleyball Cup – Men versus Russia’s Guberniya NIZHNIY NOVGOROD is perceived as one of the most important matches in the recent history of Poland’s multiple champions PGE Skra BELCHATOW. The 7-time national champions and silver medalists from the 2012 CEV Volleyball Champions League are still waiting for the first European trophy to be added to their showcase. After losing at the tie-break the first leg played in Russia on Wednesday, Skra needs to win at home by 3:0 or 3:1 in order to progress straight to the final and avoid a golden set. 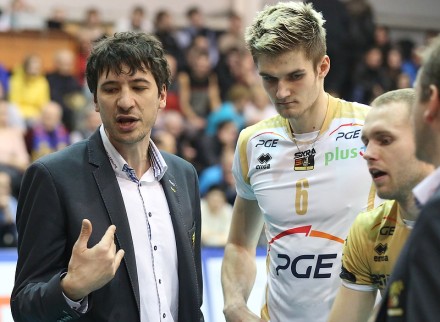 “We have already played in three Final Four tournaments of the CEV Volleyball Champions League and got two bronze medals and one silver there, but we haven’t been able to win a European competition so far” club President Konrad Piechocki says. “We want to change this and add a European Cup to our showcase which is full of Polish trophies. We remember that two years ago a Russian team, Zenit KAZAN, shattered our dreams of winning the Champions League at home. We had a couple of match points but eventually lost the final. Now we want to beat this team which comes from the same country and make the final of the CEV Cup.”

“I remember many of these matches but do not want to think about that right now” says Skra‘s head coach and former setter Miguel Angel Falasca. “I am only focusing on my players and on our preparations for this semifinal. We want to avoid mistakes and to play at the same level we showed in the third and fourth sets of the match in Russia. We are in good shape and we believe we can make the final. We did a great job on Wednesday coming back from two sets down and forcing a tie-break. Now it is time to make another step forward” he stresses.