Volleyball is like a puzzle where the various pieces have to come together and match to each other. Poland’s champions Atom Trefl SOPOT used the mid-season break to visit the factory of one of their sponsors, which produces toys, puzzles and cards. 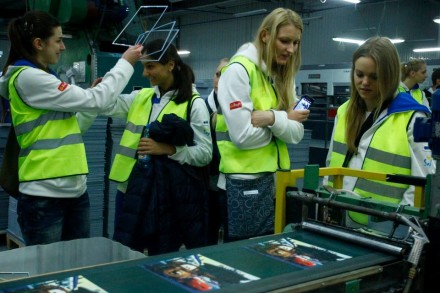 Atom Trefl has become a brand of its own in volleyball as it is currently competing for the fourth straight season in Poland’s first division as well as in the European Cups (the Atomic girls made the Playoffs 12 of the 2014 CEV DenizBank Volleyball Champions League losing there to Turkey’s Eczacibasi VitrA ISTANBUL. The official denomination of the team is made up of three words: Atom – Poland’s Energy Group (PGE), Trefl – the biggest producer of toys and puzzles in Eastern Europe, and Sopot, one of the most charming and beautiful resorts on the Baltic Sea.

“Everything is surprising here, I am mostly surprised with the size of this factory” commented team captain Izabela Belcik while touring the premises of Trefl. The players were informed that the company currently employs 400 people and its products are exported to more than 50 countries. The players returned home with nice memories and also with some bags filled with toys and other memorabilia.

“I have always been interested in mechanics and this applies also to our sport” said head coach Teun Buijs. “I was really curious to get to know how these things work; that really interests me.”

The players and their coach were amazed as they were shown the complete production process for toys and puzzles, starting from scratch. “It was really worth seeing it,” comments opposite Anna Podolec, who is fond of puzzles and left the factory with a big red bag full of giveaways.