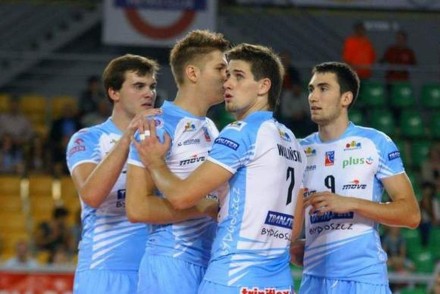 Częstochowa played a great game in the first set. The guests had huge problems with finishing their attack in the first pace. Home team led at both technical time-outs: 8-3 and 16-8. They easily ended first period in their favor.

The team from Bydgoszcz started second set with two changes in the composition. Dawid Gunia and Steven Marshall appeared on the pitch instead of Justin Duff and Marcin Waliński. The changes took effect immidiately in the form of a seven-point lead early in the set (8-1). Since that moment, everything went in favor of Transfer Bydgoszcz who noted their fourth victory in Polish championship.

Gunia was announced as MVP of the match although Jakub Jarosz was most efficiant – 19 points. In Częstochowa, Michał Kaczyński scored 17.

Resovia fans warming up for next season...