After scoring three wins this past weekend supported by the always great audience of Katowice, the guys of Poland men’s national team are still on top of the standings in Pool B of the 2012 FIVB World League. Poland beat there at “Spodek” sports hall Canada, Finland as well as the triple world champions of Brazil for a splendid red and white Volleyball fiesta. 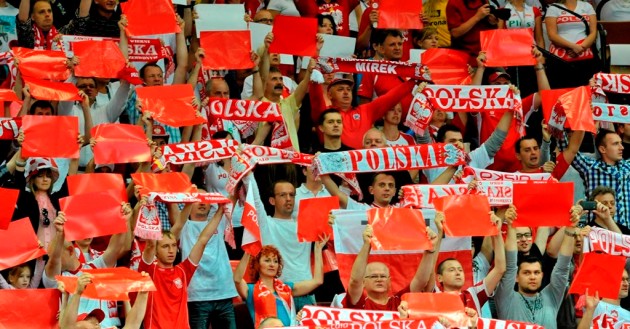 “We are really very much focused before the start of each game and we take it seriously as if it was the most important match of the season. Our main goal of the season is represented by the Olympics but we also want to qualify for the final round of the World League coming up this July in Sofia. We are still not in great shape but we play courageously and this is important” says Michal Winiarski. On Saturday Poland played and beat Finland but the players and their head coach were not that happy with the quality of their performance. “It is only our fault, because we did let Finland play their own game and hence we had some problems, but we finally took three points from that match” adds Winiarski.

However, much attention was drawn to the “big match” against Brazil on Sunday after Poland had already edged the 2004 Olympic champions two weeks ago in Canada. Poland eventually got past with the same result (3:2). “Poland played really great Volleyball and they deserved to win. Today we made a way too many mistakes as we still do not deliver our best game, but I hope it will come for London” said Brazilian star Sergio.

Some players of the Polish team are still struggling with injuries but they are slowly coming back to the arena. “I still feel somehow handicapped while jumping but it is getting better” said middle blocker Piotr Nowakowski. “I would like to learn Italian to talk to the Brazilians there at the net as they always have something to comment on during the game, especially if this is about some balls that were contested. We stayed very cool in this match and this helped us go for the victory” he stressed. “On the other hand our coach is very emotional and explosive” he added while referring to his mentor Andrea Anastasi.

Sebastian Swiderski, one of Poland’s real Volleyball stars of the past decade, officially retired from the sport this past weekend and was celebrated in Katowice by all fans. “It was very emotional and touching. It is mainly because of the people I have been spending my time with that sport is that nice. It is good to officially end my career in such a special place like Katowice, I am just about to start my next adventure as coach and we’ll see how it turns out” stated Swiderski.