The Polish champions, PGE Skra Bełchatów, showed its class in the first playoff quarter-final match of Plus League. 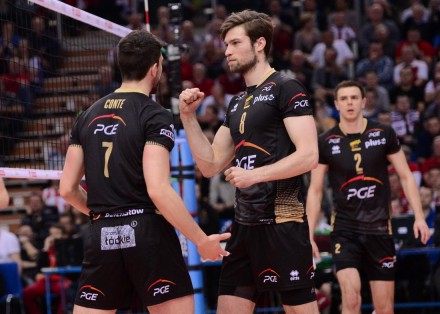 Zaksa gave a lot of problems to the Polish title holders in the first set. Bełchatów blocked home players several times (mostly by Karol Kłos and Andrzej Wroną) and thanks to that, it had the lead of 16-13 and 24-20. Still, Bełchatów failed to convert three set balls and became nervous. But, visitors didn’t waste the fourth set ball. Facundo Conte won the decisive point.

The second set was a nightmare for the local fans. Bełchatów demolished Zaksa and won it by leaving the opponents at 10 points! Polish champions had no weaknesses. Moreover, it had fantastical effect on the serve. Mariusz Wlazły and Facundo Conte had standard execution of aces.

After this horrible set, Zaksa players managed to collect themselves and make visitors’ job hard. On the first technical time it led by 8-7. The Polish champions turned it over but like in the first set, the finish of this one was emotional for them as well.

Nevertheless, Bełchatów is already with one foot in the semi-finals of Plus League. It need two more victories.

The Argentine Nicolas Uriarte was elected the best player of the match.

The second duel of teams this Saturday in Bełchatów’s Energia hall.

All is ok except Lubin..this team is crazy ..nobody see but they are going to final …nobody wrote this but this is surprise ..? No..?