Poland opened its campaign in the World League Finals by edging Brazil 3:2 (23-25, 25-23, 23-25, 25-17, and 15-10) in the splendid scenario of the local “Armeec Arena” in Bulgaria’s capital city. On Friday the team of Italian-born head coach Andrea Anastasi will play Cuba to seal its spot in the semis coming up this Saturday. 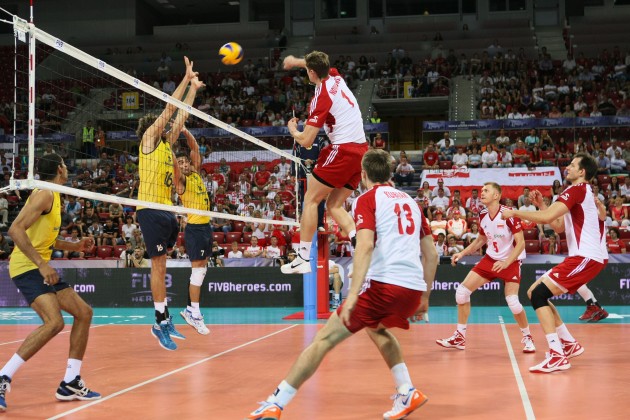 The game against the triple world champions of Brazil – who were beaten in straight sets by Cuba in their opening match on Wednesday – turned into a hard-fought battle with the opening set being a neck-to-neck race where Brazil eventually had the upper hand with the score of 23-25.

Poland stepped up the quality of its play in set 2 as Pawel Zagumny joined the game and Bartosz Kurek eventually scored the last point to draw level in the set count (25-23).

However, Brazil asserted its supremacy in set 3 going up 16:8 there as Poland was struggling in attack and reception. The guys in red and white jerseys performed a great comeback storming back to 22:23 but Michal Kubiak committed a big mistake right there and Murilo Endres silvered the first opportunity for Brazil to move up 1:2 (23-25).

The score remained pretty close also in the opening phases of the fourth set but Poland gradually changed gear and eventually called for the tie-break (25-17).

That was the very last call for the semifinals for the side mentored by Bernardo Rezende after that terrific defeat in straight sets to Cuba on Wednesday but Poland got up 8:5 and did not slow down until the last point was claimed by Kurek (15-10).

“Brazil needed to win this game and so the match turned into a real fight. We are happy that we won against the best team in the world and it is a nice feeling to be that strong” commented Zbigniew Bartman. “We fought until the end after trailing twice one set down and we showed once again that we always stick together like a real team” he added.