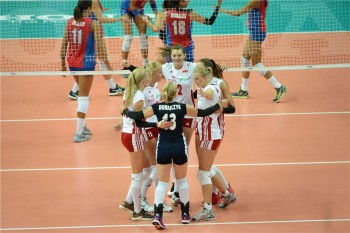 Red and white celebration in Lublin! As the host of the Group 2 final tournament, Poland had only one goal before the start of the competition – To go all the way to the end and to qualify for the Grand Prix Group 1.

So far, they have done half of the job.

Poland defeated Puerto Rico in the semi-final of the Group 2 final tournament! Red and whites could not count on several very important players, including the main star Katarzyina Skowronska-Dolata, but in their absence Katarzyna Zaroslinska took over the role of the leader. She scored 21 points and led her team toward the big win.

In the big final Poland will play against Netherlands on Sunday. The winner will advance to the Grand Prix Group 1 in 2016.

ACH M: Monstrous first tempo and a lucky save (VIDEO)

ITA M: Zaytsev and Sabbi are back, no call for Travica and Randazzo (LIST)