Poland beat Great Britain in straight sets (25-16, 25-19, and 25-18) in a pool A preliminary round match at Earls Court on Saturday. Zbigniew Bartman top scored for Poland with 20 points with Bartosz Kurek helping his side with 16, while Dami Bakare was the only British player in double digits with 14. Poland outclassed Team GB in blocking (9 vs. 0) with Kurek serving 3 out of 5 aces scored by his team. With this result, Poland improve their record to 3 wins and 1 loss in the tournament, while Team GB sits at the bottom of the charts with 4 losses in as many matches so far. 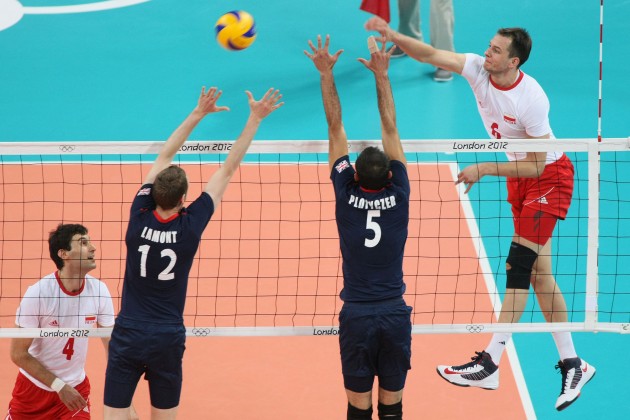 In front of a very loud crowd, Poland started strongly as they opened up a nine-point lead at 13-4, with Grzegorz Kosok and Bartosz Kurek doing the early damage. As expected, star player Zbigniew Bartman soon got involved and contributed five points to a first set win of 25-16 as Great Britain struggled.

In the second set, Team GB opened up a 4-1 lead before going 5-6 behind. Oluwadamilola Bakare scored the majority of Great Britain’s points, but errors cost them their initial advantage against a strong Poland team. The guys in white and red jerseys pulled away, but Great Britain were always on their tail and Mark Plotyczer was coming into form. Eventually, Poland put some distance between them and their opponents and took the set 25-19.

Poland continued to dominate in the final set through the point-scoring of Bartman and Kurek. Bakare was easily Great Britain’s best player and top scorer, but his teammates lacked consistency, struggled on serve and Poland pulled eight points clear as they closed in on victory. Poland eventually won the third set 25-18 and Bartman finished the match as top scorer with 19.

In the final round of matches to be played on Monday, Great Britain play Argentina and Poland take on Australia as they look to finish as high as possible to play one of the weaker teams from pool A in the 1/4 finals.

OG M: Germany cruise to second win of the tournament by routing Tunisia in straight sets

OG M: Getting to know Georg Grozer: much more than just a volleyball power!