OG M: Germany cruise to second win of the tournament by routing Tunisia in straight sets

Germany cruised to a 3-0 win (25-15, 25-16 and 25-16) over Tunisia to open the fourth round of preliminary action on Saturday morning at Earls Court and improve its record to 2 wins and 2 losses so far in the tournament. That was the second Olympic confrontation involving these teams after West Germany had bested Tunisia in the classification match 11-12 of the 1972 Olympics in Munich. 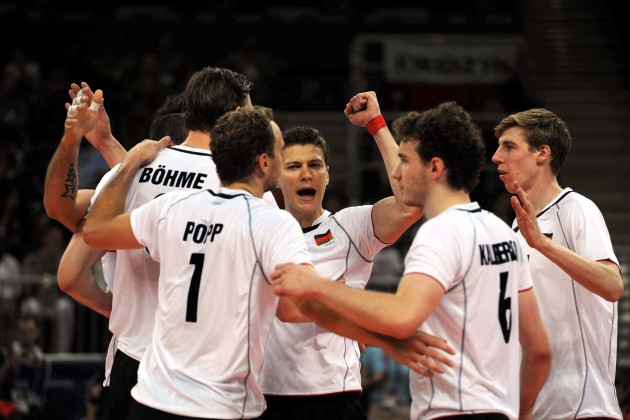 Denys Kaliberda paced Germany with 13 points as Lukas Kampa distributed quite evenly among his spikers with three more finishing the match in double digits, namely Marcus Popp and György Grozer (with 11 apiece) and Marcus Böhme (10). Hamza Nagga was once again Tunisia’s most prolific scorer with 14 points. Germany’s domination at the net is well testified by a total of 14 blocks in three sets with middle blocker Max Günthör the absolute standout in this fundamental with 5.

In the first set, the Germans started strongly as Tunisia struggled to cope with their height and power at the net. György Grozer dominated the point-scoring early on for his team while Hamza Nagga kept the Africans within touching distance. However, after the first technical time-out, Germany started to pull away as errors crept into Tunisia’s play. Denys Kaliberda and Marcus Popp also took advantage as Germany comfortably took the first set 25-15.

Ahmed Kadhi started the second set well as Tunisia stayed within good distance of Germany. However, Germany began to pull away against the pool’s bottom side as Marcus Böhme also contributed to the scoring and Germany eventually won the second set 25-16.

In the final set, Germany continued to dominate as Tunisia committed more errors. Some great blocking by Max Günthör contributed to Germany’s points tally and they eventually won at a canter – taking the final set 25-16.

Germany are still in full contention for a spot in the 1/4 finals and will round out the schedule of preliminary Pool B by playing the triple world champions of Brazil on Monday while Tunisia take on the provisional leader of the group, Team USA, on that same day for the last match of their Olympic campaign.