It was history in the making on Sunday afternoon in Gdynia as Belgium came back from trailing 1:2 to eventually edge Turkey at the tie-break (26-24, 17-25, 21-25, 25-22, and 17-15) to claim their first medal in the Junior European Champs. It was a game full of ups and downs, where Turkey demonstrated once more good quality in all fundamentals, and especially in defense, but Belgium’s fighting spirit and team work were enough to make the dream of a first European medal come true. A total of four Belgian players finished the game in double digits – topped by Francois Lecat with an impressive haul of 26 – while Turkey’s captain Baturalp Burak Güngör paced his side with 17. 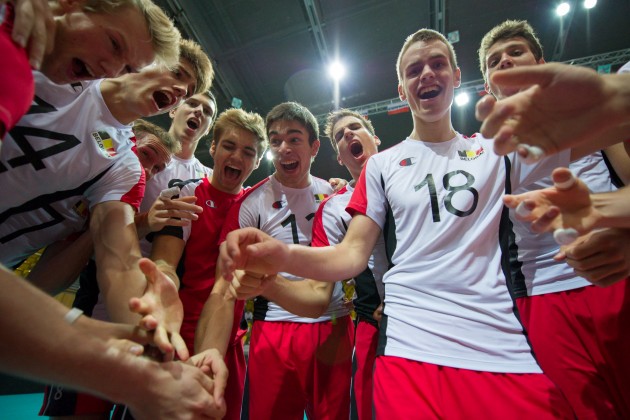 At the end of a very positive campaign Belgium and Turkey got the right to fight for what would have been their first medal in a European Championship; Belgium had already – and massively – improved on their best result, a seventh place from the 2008 edition in Brno, while Turkey’s highest rank remained a fourth place from 1994. If their compatriots had stood on top of the podium last week in Ankara at the end of the women’s Championship, thereby prolonging a winning streak that had started in the youth division, the guys were still relatively new at this level but the performance of the Turkish squad certainly stood as an additional confirmation of the excellent work performed by the local Federation via its Volleyball high-schools. Belgium, on the other side, has been particularly active in developing the last generations of Volleyball players, and so a medal would have been a unique reward and the right culmination of a long-term strategy implemented some years ago.

Turkey caught the best start (8:5) as the players around coach Vanmedegael looked a little tired, probably feeling some fatigue at the end of a long and stressful tournament. They gradually found their way into the game and reduced the gap to a minimum (12:11) as their best players – wing spikers Francois Lecat and Tomas Rousseaux – showed more consistency in offense but still Turkey was setting the pace of the game by the second technical time-out (16:14). The guys in red jerseys were well marshaled by their setter Murat Yenipazar, while captain Baturalp Burak Güngör regularly showed some great athleticism in attack; an ace by Samet Gümüs piled up three set balls for Turkey, Belgium responded by scoring twice, and a net violation by Yenipazar moved the count up to 24 all. Depovere and Colson joined forces for a double block that pocketed a first opportunity for Belgium to go up 1:0 and eventually middle blocker Martijn Colson stopped the next Turkish attack to cash the final 26-24.

Turkey probably suffered that setback and started out in set 2 by committing a flurry of errors and going rapidly down 0:4. Belgium rushed to an 8:4 lead by the first mandatory stop playing with confidence and good intensity in all fundamentals; Turkey nevertheless stormed back to level at 8, the game was briefly stopped at 14:12 for Turkey as Colson suffered an ankle injury and the side coached by Ali Kazim Hidayetoglu claimed a margin of three once the referee called for the second mandatory stop. This time Turkey did not lose composure and eventually wrapped it up at 25-17 to make it 1:1 and start everything again from “tabula rasa”.

Similarly to what had happened in set 2, the side coming off from winning the previous section got to a flying start, this time with Turkey scoring five points in a row. This paved the way for a massive 8:2 at the first technical time-out; Belgium had too many ups and downs to compensate for this negative break, while Turkey exploited every single chance to stretch the margin and even though they rested their captain Güngör for a long while, the Turks comfortably cruised to the final 25-21.
Belgium re-opened the fate of this classification match playing with glowing hearts in set 4 where the score remained close up to halfway through before Rousseaux & Co. dismantled their full potential, especially in offense, and even a solid performance by Turkey’s defense line could not help much but call for the deciding tie-break (25-22).

This was the third time Turkey had to play a fifth set in the tournament, having previously lost both tie-breaks to Spain and Bulgaria in Randers, while Belgium could rely on the good omen of their 3-2 win over Poland going into it. The guys around coach Vanmedegael opened with a splendid 4:1 break to set the tone for the last act of an already incredible match, where Turkey responded with a similar run to flip the charts around only a couple of minutes later (5:4). The tension and fatigue were evidently handicapping the quality of the actions on court, Turkey was able to close a gap of two points to make it 9 all, move up 11:9 with a couple of blocks, Belgium missed out on a first match ball at 14:13, and the third chance turned to be the “golden” one as everything came to a close on a net violation by Turkey’s setter Yenipazar (17-15).

WL M: We can learn a lot from Portugal – Benne