PGE Skra BELCHATOW continues its perfect run in Pool E of the 2013 CEV Volleyball Champions League by downing Tomis CONSTANTA. Marko Bojic was the best player of Tomis, and the best scorer of the match registering 18 points. 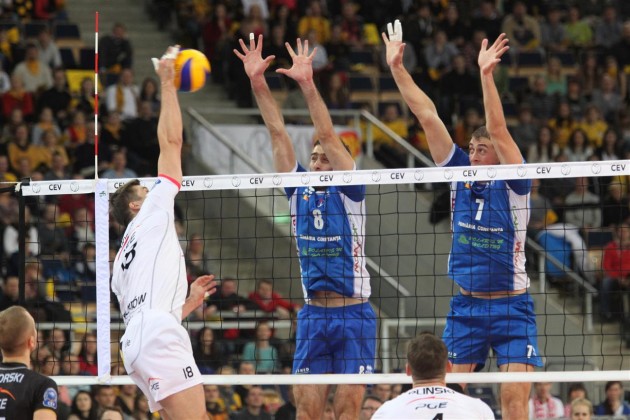 PGE Skra started without 3 important players. It had been known before that Aleksandar Atanasijevic would be out because of injury but on Wednesday Mariusz Wlazly felt pain in his back, stayed on the bench and had to be replaced by Konstantin Cupkovic, who usually plays as a receiver. Wytze Kooistra could have been another replacement on the opposite position but the regular middle-blocker could not be moved as Karol Klos was out due to family problems.

These substitutions made the strong favorite (PGE Skra BELCHATOW topped Pool E with 12 points) quite vulnerable and Tomis CONSTANTA tried to make use of that. The Romanian rookie took the lead at 17:15 in the opening set after a series of good attacks of Mladen Bojovic and Marko Bojic (who is actual Polish champion with Resovia RZESZOW!) but an ace by Pawel Woicki and attack by Daniel Plinski put the home team to the front (18:17). A good attack killed by Wytze Kooistra sealed the opening set in which PGE Skra middle-blockers scored a total of 7 points from 8 attacks. 12 points of Bojovic and Bojic turned to be not enough for Tomis. It is worth mentioning that only 9 mistakes were made in the opening set (6 by Tomis).

The second set was equal until the second technical time-out. When Igor Merkushev put two attacks out the gap (18:14) was too big to be compensated. The players from CONSTANTA took real risks with their serve but it did not pay back as the guest team made 7 errors and scored no points.

The third set turned out to be the last as PGE totally dominated the opponents, leading even 14:4!

Marko Bojic was the best player of Tomis, and the best scorer of the match registering 18 points.