Russia: Dinamo embarks on preparations for next round with Iraklis

Moscow, Russia, January 25, 2012. After scoring a 3:0 (25-15, 25-14, 25-22) win against Stroitel MINSK in the last round of the Russian Superleague – that this year was open also to teams from Belarus and Ukraine – Dinamo MOSCOW has started preparing for the home match with Iraklis THESSALONIKI coming up next February 1 for the Challenge Round of the 2012 CEV Volleyball Cup. 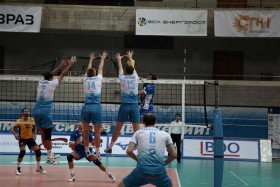 Dinamo totally outclassed Stroitel, especially in blocking and attacking, with a great help coming from middle blocker Alexey Ostapenko whose efficiency eventually stood at the amazing rate of 80%. Stroitel is also still competing in the European arena having made it to the 1/8 finals of the 2012 CEV Volleyball Challenge Cup to play France’s RENNES Volley 35.

4 players included in the roster of Dinamo MOSCOW – Sergey Grankin, David Lee, Peter Veres and Dmitry Shcherbinin – will join this weekend the annual “All Stars Game” which is set to take place in Belgorod.