Russia’s Dinamo KRASNODAR claimed on Sunday the 2013 CEV Volleyball Challenge Cup – Women to round off a long but memorable European season. After scoring an away win this past Wednesday, Dinamo lost the return match to Italy’s Rebecchi Nordmeccanica PIACENZA 1:3 (22-25, 25-22, 23-25, and 24-26) but eventually got the upper hand at the golden set (15-8). This and other volleyball news read on Worldofvolley.com. 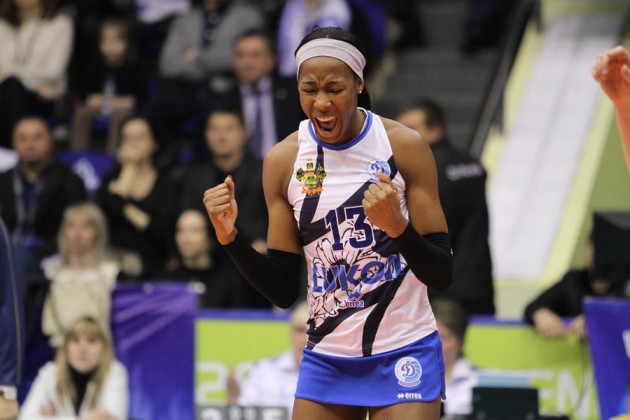 This is the very first European trophy for Dinamo KRASNODAR whose best result to date was the second place claimed in the 2011 CEV Volleyball Cup where that side has lost to another Italian team, namely Robur Tiboni URBINO. The final match was followed by 3,000 fans that could enjoy much more than a Volleyball game, as a real show with music and dance was prepared by the local organizers. US American Destinee Hooker  – a silver medalist from the 2012 London Olympics – paced Dinamo with 27 points showing off her athletic skills (she’s a former high jumper with a personal best standing at 1.98 m) while Floortje Meijners was the most prolific scorer for the guests from Italy with 19 points. Marina Maryukhnich of Dinamo was awarded as MVP of the final matches.
Rebecchi Nordmeccanica PIACENZA got off to a flying start in the first set dictating the tempo of the game at the first and second technical time-outs (6:8, 12:16); as his side was trailing 14:20, Dinamo mentor Avital Selinger decided to stop the game and his players responded well by cutting the gap to only two points (18:20). However, Rebecchi Nordmeccanica did not lose composure, did score the next three rallies and could eventually bring it home at 22-25.

Dinamo KRASNODAR showed they had found their rhythm by opening the second set with a 4:1 series and keeping the lead also by the first mandatory stop (8:4). PIACENZA fought their way back (9:8) but after a time-out asked by Selinger, Dinamo re-accelerated the pace (14:9). This time it was Italian mentor Gianni Caprara to stop the game, PIACENZA clawed back once more (14:13) and the score was eventually leveled at 18 all. Dinamo moved up 21:18 but Meijners aced for the 21:20; the final rush was really dramatic with PIACENZA drawing the count at 22 all before Hooker finalized the quest of her side at 25-22 for the 1:1.

PIACENZA started out very aggressively in the third set (0:4, 2:7) but after a series of great actions in defense, Dinamo could make it 8 all. With Hooker on fire, KRASNODAR cruised to the front but PIACENZA did not lose composure – also after the injury of their libero Stefania Sansonna – going up by three points. Rebecchi Nordmeccanica set the pace of the game halfway through (12:16) and Martina Guiggi eventually widened the gap to 6 points (12:18). PIACENZA broke away (14:21) but Dinamo responded by scoring five points in a row (19:21), so that the guests from Italy needed another close final rush before they could celebrate the provisional 1:2 (23-25).

The early phases of the fourth set did see the score remain very close up to 10 all before Dinamo got a slim edge (14:10); PIACENZA did not want to give in and after trailing by two, three points for most of the set, the guests could eventually flip the charts around (21:22). Hooker leveled at 22 all but the stellar block displayed by the Italians contributed a couple of set balls (22:24). Dinamo did fight their way back once more but two more points (24-26) sealed the final 1:3 and called for the golden set.

Dinamo caught a good start there (2:0, 4:2) and though the players of Rebecchi were playing with glowing hearts, they still could not compensate for that initial gap (8:4). After teams switched sides of the court, Dinamo changed gear moving the score up to 12:6 and Hooker claimed a series of match balls as she spiked for the 14:7. PIACENZA could keep their hopes alive by scoring the next rally but only a few seconds later Dinamo KRASNODAR could celebrate the first European trophy in their still young history.

To read more news from this competition click on CEV Challenge Cup – Female.