Two teams are needed for a good match. In the first semi-final of the European Championship in Germany and Switzerland only one team have played - Russia. 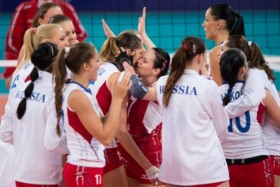 A stronger resistance from the current European champions, Serbia, was expected, but “Zbornaya“ was really too strong in Berlin’s, “Max Schmeling Hall“ 3-0 (25-23, 25-19, 25-12). The top scorer of the match was Jovana Brakočević opposite of Serbia with 17 points.

Victory in straight sets tells a lot, even to a people who didn’t watch a match. Russian players played fantastic. They were confident, concentrated, highly motivated… And, they definitely deserved a victory.

Only the first set was uncertain of outcome and it was only ona in which Serbia had a chance but made too many service faults. Russia had a great opening of the match and led 4-1 and 9-5. Serbia did not surrender, and little by little they reached Russian advantage and tied it up to 15-15. However, Russia has regained two-point lead and repeatedly, Serbia equalized again and was losing to the very end.

It seems that losing a first set totally disrupted a defending champion. When match continued, Serbian players were bad in offense, sloppy in defense…  And, unfortunate to them, on the other side of the net was an outstanding team

The second set began like the first, except this time, Serbia did not hold on. It was 6-1 for Russia, Serbia approached to 6-8, but that was all from the European champion, not only in this set, but until the end of the match. Russia gain the advantage thanks to great defense and perfection of realization in counter-attacks and it was growing by the minute (10-6, 13-8, 16-10) to the final 25-19.

The third set was a game of cat and mouse. Russia has imposed a rhythm from the start and after leading by 5-2, they also led 8-2, 16-6, 18-9. It was really a pleasure to watch with how much diversity Russia has played in the attack until the final 25-12 and placement in the grand final.

To see photos from this match click on Galleries.

PHOTO OF THE DAY: Seven players on...