Out of three quarterfinal series in Russian Superliga, experts were least expecting some fight in a clash of a clear championship favorite Zenit Kazan and surprise team of this year’s playoff Gazprom-Yugra Surgut. 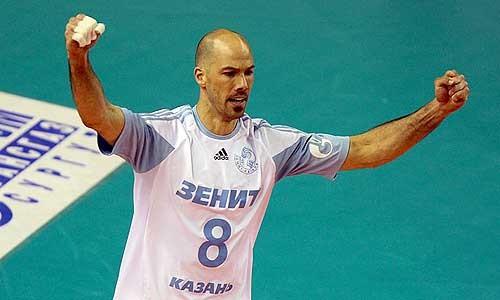 Zenit has scored the easy 3-0 victory at home but their coach Vladimir Alekno was foreboding of the troubles that his team could face in Surgut.

“I’m expecting a very intense fight in our next game” – he said. As it turned out – he was absolutely right.

From the start of the game home team looked very assured and took an early advantage of Kazan’ errors. Once again Bulgarian duo Todor Alexiev and Teodor Todorov led their squad with confident attacks and good work on block. On the other hand, Zenit’s setter Valerio Vermiglio had big problems in finding connection with his teammates, especially with opposite hitter Maxim Mihaylov, whose attacks were blocked time after time.First set deservedly went to Surgut 25-21.

In the start of the second set home team had some lead but defending champions slowly but surely got themselves together, their offence became more efficient. The big role in that Alekno’s substitutions has played – Alexander Volkov and Reid Priddy entered the game successfully. Score was in fragile balance until Surgut’s players made some decisive errors. Kazan equaled the match with 25-21 second set.

Cheered on by winning the second set, Zenit made the good break in the third 17-11. But Gazprom-Yugra was anything but giving up that day. The opposite of Surgut Anton Mysin came up to serve and Kazan’s reception fell apart, allowing the hosts to claw back the deficit – 17:17. Nervous game filled with long rallies has led the teams to thrilling set finale. Gazprom-Yugra had 1 point advantage and from 24-23 score had 8 set points which they were unable to convert. Zenit managed to make side outs at these crucial moments and went ahead at 33:32. Home team put up a great fight but 5th set point was lucky for favorites -37:35.

Start of the fourth set stunned everybody. No one could remember the last time when the team of Zenit’s class has lost 8 straight points: 8-0 to Surgut. Home team had to trouble using this handicap to take the game into five sets 25-19. Fifth set didn’t disappoint the spectators either. Slim advantage went from one team to another and it was impossible to predict the winner till the very end. Young players of Surgut showed their skills and will to fight but still it wasn’t enough as the set, game and series went to more experienced side 16-14.

Zenit is going through to the semi final but Surgut’s left the court with their heads held high. Todor Alexiev have scored 26 points and Teodor Todorov-16 (6 blocks and 10 points out of 12 attacks).

There was no surprises or the real fight in the other matches, so the semi finals of Russian Superliga 2011/2012 look like this:

GRE M: All the results of Final – 8 for the Greek cup

DOMINATION: Does Muserskiy need to play these...