On Sunday by the time Dinamo KAZAN was routing VakifBank ISTANBUL in the final match of the 2014 CEV DenizBank Volleyball Champions League at the Crystal Hall in Baku, their compatriots and friends of Zenit KAZAN were playing a Superleague match with Guberniya NIZHNIY NOVGOROD, their last stop on the way to the Final Four coming up this weekend in Ankara. 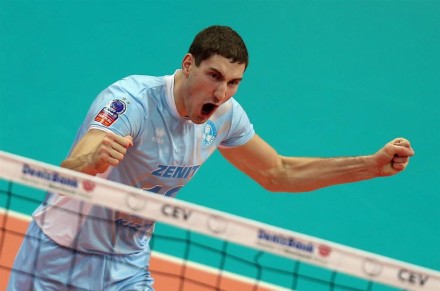 “The final match played by Dinamo in Baku and our match with Guberniya were running simultaneously,” recounts Zenit KAZAN superstar and opposite Maxim Mikhaylov. “We found out that Dinamo had won the trophy only after the end of our match. We were informed only once we went back to the dressing room and we were evidently delighted by these good news. We all train in the same hall, we keep in touch and we always follow each other’s results. I can’t say that I am surprised with Dinamo’s victory in Baku. I have seen how hard they have been working and training, so finally they achieved their goal. This was a historic event also for Russian Volleyball because no other team from our country had won the Women’s Champions League before.” Uralochka EKATERINBURG had indeed won Europe’s elite competition back in 1995 but at that time it was still played under the previous denomination of Champions Cup.

This coming weekend the players of Zenit KAZAN will be vying for their third crown in the CEV DenizBank Volleyball Champions League after seizing the trophy in 2008 and 2012. After Dinamo topped the final standing in Baku, the teams from Kazan may go for an unprecedented clean sweep. “I do not think we feel additional pressure after the women’s team won in Baku,” Mikhaylov stresses. “Zenit has regularly participated in the Final Four Tournament and every time we are expected to win the cup. I think we felt more pressure two or three years ago but now the team can count on many experienced players who all know how to deal with the pressure. We definitely want to repeat Dinamo’s success and bring home another trophy.”

The players of Dinamo were received by the President of the Republic of Tatarstan upon their return from Baku and it really looks like the city of Kazan is turning into the world’s Volleyball “Mecca”. Which is the secret behind this unique success story? “I think our success stems mainly from the support which is being provided by the local authorities. One of their priorities is the development of professional sports and their promotion among the young generations. The results show that their policies have brought the desired effects. Right now Kazan is a city known all over Europe for its high-profile teams. Volleyball has a lot of fans and followers in Kazan though a lot of attention is being drawn also by other professional teams such as Rubin (soccer), Unics (basketball) and Ak Bars (ice hockey). However, Zenit was the very first team from this city to achieve international success and now we are being followed by Dinamo that just won the CEV DenizBank Volleyball Champions League.” 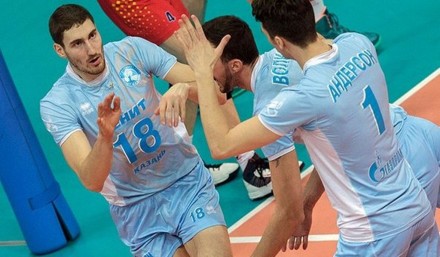 The Final Four weekend will get started on Saturday with an all-Russian derby starring Zenit KAZAN and Belogorie BELGOROD. After losing in straight sets to Belogorie in the semis of the Russian Cup played in late January, Zenit will be trying to avenge that defeat in order to make the final and have a shot at the trophy. “Actually this season we have lost three times to Belogorie but twice at the tie-break,” Mikhaylov recalls. “However, every match is different. We know each other really well and our coaches will have to explore new ways, to invent something that will surprise our opponent. The team that is in the best shape will claim that semi-final on Saturday. We are preparing very intensively for this game and our only goal is to edge past Belogorie in order to play the final.”

Maxim embodies the quintessence of a professional player who is always fully focused on his duties and prepares for all matches with the greatest attention. “Well, this focus comes from the fact that Volleyball is my favourite work. Every time I want to perform the best I can and please my fans. However, sometimes you also need some distraction. For this reason I go to the cinema with my girlfriend, or chat with friends on social networks or simply go for a walk during my days off. I also love watching and following other sports; right now the Gagarin Cup in ice hockey is running and I am supporting Lokomotiv Yaroslavl. I have been a fan of this team since I played there for Yaroslavich and have remained loyal to them ever since.”