RUS M: Race is still ON, miraculous comeback by Zenit

Zenit managed to score all three points against Orenburg away and to remain right behind the first placed Belogorie. The last round of the Russian Championship will decide who will take the pole-position for the Playoffs. 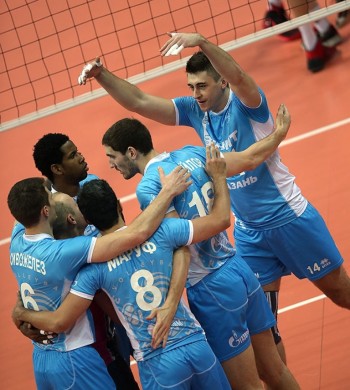 Zenit performed truly a miraculous comeback in the game against Orenburg. Teams were all tied at 1-1 in sets, while the home side was cruising toward the win in the third one. It was 22:18 for Orenburg, and Zenit was really close to lose at least a point on this match. However, Kazan crew managed to turn things around!

They firstly approached to 24:22, and then scored 4 points in a row! Alexey Spiridonov had some great services, but it was a strong block which was bringing points to Zenit. At the score 24:23, away team performed three blocks in a single point and eventually tied the game at 24:24! Kazan took next point as well and had a set ball at 25:24, but then referee made bit of confusion with one doubtful call. Players of Zenit was furious, but after reviewing a play on the video check system, referee decided to repeat a point. And, away team scored again from the block and seized the third set – 26:24, 2-1!

The fourth set turned out to be completely one-sided. Kazan powerhouse dominated from the beginning to the end and managed to collect all three points.

We will have a dramatic last round of the Russian Championship. Zenit is one point behind the first placed Belogorie…

Brilliant save: There’s no lost ball for Milan Bencz (VIDEO)

EXCLUSIVE: Calderon – “I will never play...