RUS W: It doesn’t work without Gamova, Kazan got eliminated from Victory Cup!

Dinamo Kazan will not play at the F4 of the Russian Victory Cup! 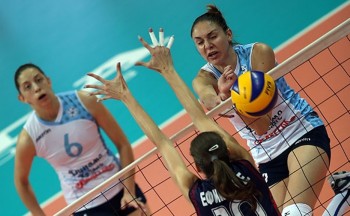 The reigning champions of Russia have suffered quite a shock at the start of the new season. Dinamo Kazan lost the game against Omichka – 2-3 (15:25, 25:22, 20:25, 25:21, 11:15) and got eliminated from the Russian Victory Cup! Still, there must be mentioned that Kazan squad played without many first team players, including Ekaterina Gamova who got injured.

The four teams which qualified for the final tournament of the Russian Victory Cup are – Omichka, Dinamo Moscow, Leningradka and Enisey.

FRIENDLIES W: Veljković and Ozsoy for a draw in Belgrade