Russia started its Olympic campaign on Sunday by downing Germany in three straight sets (31-29, 25-18, and 25-17) in the first match on schedule for Pool B. With this result the guys coached by Vladimir Alekno improved on their already remarkable record sealing the 18th win out of 21 international matches against Germany officially sanctioned by the FIVB. Russia registered superb figures with a total of 11 blocks and 5 aces throughout the match, but remarkable remains also the 127 km/h serve by György Grozer, a terrific missile that even the Russian defense line could not fully stand. 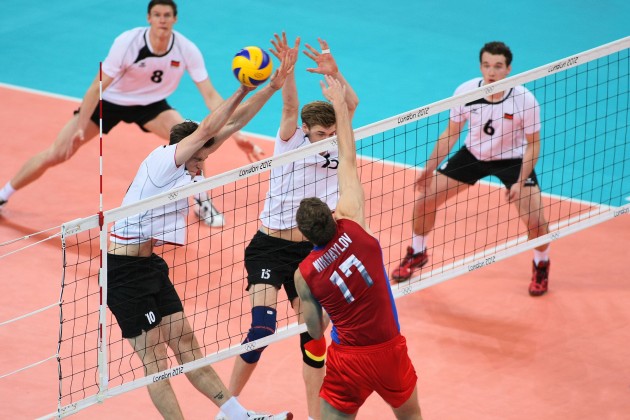 In the first set Germany started well working together as a unit to block Russia’s powerful attacks. But Russia’s key man Maxim Mikhaylov was dominant as his tall side pulled ahead. The tallest man in the competition, 218 cm tall Dmitry Muserskiy, was a huge blocking presence at the net. Germany fought back through spikers Jochen Schöps and Marcus Böhme, and the sides couldn’t be separated as they fought their way to 29-29. After a real struggle, Russia got the points needed to win the opening set with the score of 31-29.

In the second set, Russia setter Alexander Butko fed his spikers accurately with Mikhaylov being the man ending most of his moves, and Alexander Volkov also scoring heavily. Germany’s setter Lukas Kampa kept his team moving and Schöps continued to impress, but the Russians never looked under pressure as they cruised to a 25-18 set win.

The third set was close early on, with the teams trading points from their key spikers. György Grozer was influential for Germany, but Russia’s power once again was too much as the match progressed. The heirs of the Soviet school eventually claimed the final set with the score of 25-17 as Mikhaylov dominated the court – he ended up by registering 21 points – and his fitness will be crucial to Russia‘s bid to take the gold medal.