CEV CUP W: Is this the moment when Kosheleva “was revealing Galatasaray’s tactics”? (VIDEO)

Many accusations came from both sides after the 1st leg of the CEV Cup Finals between Galatasaray and Dinamo Krasnodar. 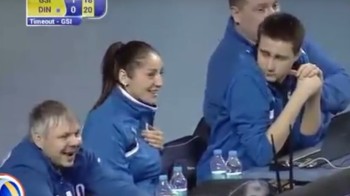 Tatiana Kosheleva, who did not played the game due to injury, accused the Turkish fans of throwing various objects on the court, while she also accused Galatasaray head coach Ataman Guneyligl of showing her a middle finger!

The Turkish side responded quickly and stated that Kosheleva was revealing tactics of Galatasaray throughout the game, as she was sitting behind the court next to the statisticians!

There is a video on YouTube in which you can see that Galatasaray head coach was furious during a time-out and that he sent Nadia Centoni to tell something to the main referee. While she was speaking with the referee, she was pointing in the direction of Kosheleva…

At the same time, the Russian player was just smiling… Watch this situation at 08:55 in the following video.

CEV CUP W: Check out part of the atmosphere from Istanbul (VIDEO)

GRE M: Piazza – “I want to stay in Olympiacos!”