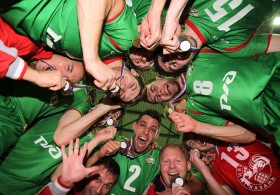 Lokomotiv cruised to a speedy 3:0 (25-20, 25-22, 25-20) to edge their Siberian neighbors and thereby book a spot to represent Russia in the 2013 CEV Volleyball Champions League. Cuban-born Michael Sanchez Bozhulev was voted MVP of the finals and paced Lokomotiv with 18 points.

Sanchez was a member of Cuba national team up to the 2009 FIVB Grand Champions Cup but was forced to miss the next couple of seasons after leaving the Caribbean island.

Lokomotiv NOVOSIBIRSK is currently ranked second in preliminary Pool E of the 2012 CEV Volleyball Champions League – Men with a 3:1 win/loss record after four rounds of action. The guys from Siberia’s largest city have good chances to crown their first participation in Europe’s most elitist competition with a ticket for the Playoffs 12.