Tirana, Albania, December 29, 2011. The first half of Albania women’s national league was completed yesterday with Tirana topping the charts (46 points) having suffered only one loss so far. 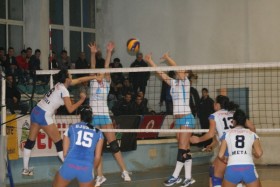 Last year’s champions Minatori is ranked second while Teuta rounds out the top three. After being relegated to the bottom of the standings for many years, Partizani got the provisional fourth place thereby advancing to the so-called “Top Volley League”.

Partizani had the upper hand after a very tough duel with UMB Volej that will be participating in the “Volley League” together with Skenderbeu, Studenti and Korabi.

Even though quite many matches were very tight, Tirana soon emerged as the real leader of the regular season but Minatori and Teuta are expected to be extremely tough competitors for the team from Albania’s capital city right from the start of the “Top Volley League”.   In January all teams participating in the national league may finalize some transfers, thereby possibly changing the current balance; the national championship will resume only in late February after completion of the elimination phase on schedule for the national cup.