Lausanne, Switzerland, December 30, 2011 – With human tragedies, financial upheavals and political instability affecting a number of leading volleyball nations, it was reassuring to see the sport triumph over adversity and continue to broaden its footprint around the globe. 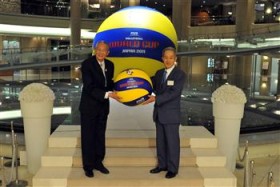 FIVB President Jizhong Wei in his New Year message spoke of how volleyball is expanding its reach globally and how the FIVB is not only promoting the sport but, through the Volleyball for Peace program and the Peace and Sport Organisation, also seeking to improve the lives of those it touches. The tragic earthquake and tsunami in Japan forced the FIVB to move all Japan’s World League games to venues in other countries and replace Sendai as a venue in the FIVB Women’s World Cup.

Japan eventually provided the volleyball calendar with a typically slick and exciting climax when it hosted both the men’s and women’s World Cups.

The host nation played typically dynamic volleyball and narrowly missed out on a berth to the 2012 London Olympic Games, finishing fourth in dramatic fashion.

Japan’s early 3-2 loss to China cost them dearly, but they still had the final say in the competition when they beat favorites USA 3-0 in the final match, dropping the impressive Americans (9-2) into the silver-medal spot behind Italy, who finished with 10 wins and only one loss to capture gold and one of the three Olympic spots on offer. China (8-3) matched the Americans’ points total (26) but had to settle for the bronze medal. Italy’s Carolina Costagrande was named the tournament’s MVP.

In the men’s competition, Russia also won with a 10-1 record, beating out the challenge of Poland and Brazil (both 8-3), who finished second and third, respectively. Russia’s Maxim Mikhaylov took the MVP award. Japan’s men couldn’t match the success of their women’s team – they finished 10th – but they, too, provided the home fans with a lift, which President Wei alluded to in a speech during the competition.

“I would like to thank the Japanese people for the extraordinary lengths they have gone to to support the FIVB Volleyball World Cup and all the international teams in both the women’s and men’s editions,” President Wei said. “After all that the country has gone through this year, following the devastating earthquake and tsunami, the FIVB Volleyball World Cup is proving to be a wonderful celebration of spirit and sporting endeavour for the Japanese people.”

In the World League, Russia dominated Pool B with 11 wins and only one loss (3-1 to Bulgaria in their penultimate match), finishing with 31 points, nine ahead of second-placed Bulgaria (7-5). In Pool A, Brazil were almost as dominant with a 10-2 record, both their losses coming to second-placed USA (8-4). Pool C was much closer with resurgent Argentina the surprise winners with a 9-3 record, while in Pool D, Italy (10-2) dominated. Russia won three straight in Pool F and dug deep to beat Brazil 3-2 in the final in the Polish city of Gdansk. Argentina topped Pool E but their hopes of a medal were dashed by the home side, Poland triumphing 3-0 in the third-place playoff.

In the World Grand Prix, Serbia, Russia, Thailand, Japan, USA, Brazil and Italy qualified for the final round along with hosts China. Surprisingly, China and Italy lost all their matches in Macau and finished bottom of their respective pools, while Brazil and in-form Serbia advanced to the semifinals unbeaten. Serbia’s run ended with a 3-0 loss to the United States in the semis, while Brazil overcame Russia by a similar score. In the final, the Americans beat the World No. 1 team 3-0.

After their excellent year, USA displaced Brazil at the top of the women’s rankings, while Japan – who captured the Montreux Volley Masters in June – held on to third place ahead of Italy and China. On the men’s side, Brazil finished the year as No. 1 ahead of Russia and Italy, while Poland rose to fourth, one above USA.

In the Men’s Junior World Championship in Brazil, Russia took gold ahead of Argentina and Serbia, while in the women’s event in Peru, Italy came out on top ahead of Brazil and China.

Turkey did themselves proud as hosts of the Girls Youth World Championship by taking gold ahead of China and Serbia, while in the boys’ championship in Argentina, Serbia dominated and were followed by Spain and Cuba.

The Club World Championship in Doha was won by Italy’s Trentino Diatec Trento, who beat out KS Jastryebski Wegiel of Poland and Russia’s Zenit Kazan.

World Of Volley Team Wishes You