In front of 5’200 astounded spectators in today’s second semifinal clash, host Turkey overpowered 2008 runner-up Russia in five sets (18-25, 25-23, 23-25, 25-23, 15-6) to challenge Serbia in Sunday’s gold medal match of the 2012 CEV Junior Volleyball European Championship – Women. A 23-20 lead in the fourth set was not enough for Russia to pull through, giving their opponents the chance for a remarkable comeback. Best scorer of the exhilarating match at Baskent Hall was Russia’s Kseniia Ilchenko with 16 kills. 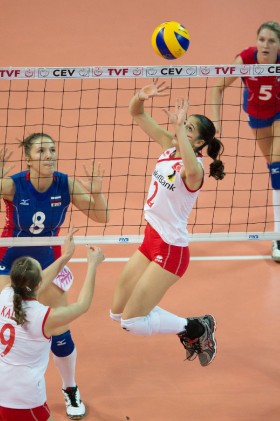 It seemed as the young Turkish talents were quite nervous in the beginning of the first set. On the other side, powerhouse Russia made an excellent start into the match with Voronkova and Rimma Goncharova on fire. At 1-5, Turkey’s head coach Gökhan Edman called his ladies already off court to try and break Russia’s rhythm. It didn’t help as the East Europeans kept control, opening the gap to seven points at the second technical break. Turkey saved a set ball at 17-24, before Irina Voronkova ended the first period in Russia’s favor. The squad of head coach Svetlana Safronova booked three block kills in the first set, Turkey zero.

In front of their enthusiastic home crowd, the host slowly but surely found their pace in the second set. On the other side, Russia tried to distance their opponents with powerful serves. Turkey had a small advantage at the first technical break (8-6), whilst Russia led by one point at the second technical time-out (16-15). The promising Russian talents were still two points ahead at 22-20, but needed a pause at 22-22 to recover from two exciting Turkish combinations. Ceyda Aktas blocked for a 23-22 lead, before she brought up set point for Turkey two rallies later. Irina Fetisova sent the ball out of bounds to level the set-counter to 1:1. It seemed as Turkey had now found their pace whilst the Russians started to struggle. It was a demonstration of strength and power with the Turks completely dominating their adversaries in the first part of the third set. Turkey led 21-15, then 23-18, but couldn’t conclude. Seven (!) Russian points in a row turned the match upside down (25-23). It seemed to be the turning point of today’s second semifinal duel. But Turkey bounced back heroically. 20-23 down at the end of the fourth set, captain Damla Cakiroglu served five times in a row to level the match to two sets all, electrifying the 5’200 fans at Baskent Hall in Ankara.

Turkey jumped out for a 5-0 in the beginning of the fifth set. The Russians completely lost momentum, whilst the host never looked back. Ercan hammered for an 8-2 lead at side switch, before Ceylan Arisan concluded a fast Turkish combination to make it 12-5. Setter Cagla Akin brought up match point with a service winner, and a Russian mistake at the net offered the home squad a very hard-earned tie-break win (15-6).

Turkey head coach Gökhan Edman: “I would like to congratulate the players for this thrilling match today. Russia found excellent solutions to challenge us, but at the end my team took advantage of its experience.”

Turkey captain Damla Cakiroglu: “We showed an outstanding fighting spirit today. We never gave up; even though in the fourth set when Russia was very close to win.”

Russia head coach Svetlana Safronova: “Congratulations to Turkey. But I’m sure at home the result would have been different. The Turkish fans helped their team a lot. On the other hand, my players missed some experience in the crucial moments of the match.”

Russia captain Elena Novik: “Unfortunately, we committed too many mistakes tonight. We had the opportunity to win, but were not experienced enough to pull through.”

ECJ W: Serbia and host Turkey to battle for gold in Ankara