RIO 2016 W: BREAKING! Startseva was cut from Russia’s roster because of doping scandal!

Everyone were very surprised when they did not see Evgenia Startseva in the final roster of the Russian national team for Rio Olympics. While now we might have an explanation… 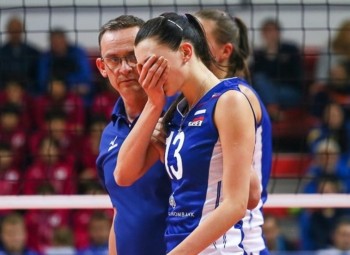 According to Bruno Voloch, the real reason why Russia head coach Yuri Marichev decided to cut Evgenia Startseva from the 12-player roster is – doping! This source writes that Startseva was on the list of 10 volleyball players who were marked by WADA (World Anti-Doping Agency) as the cases of “Disappearing Positive Test Results in Russia between 2012 and 2015”.

Recall that WADA announced that there are 643 cases of Disappearing Positive Test Results in Russia between 2012 and 2015 and that 10 of them belong to volleyball players. Immediately, after that announcement, the FIVB requested from WADA to disclose the names of those players.

Bruno Voloch says that Evgenia Startseva is one of those 10 players, so the Russian Volleyball Federation did not want to risk another doping scandal and they suggested head coach Marichev to cut Startseva from the final roster.

If you remember, Evgenia Startseva missed the 2015/16 CEV Champions League Semi-Finals between her Dinamo Kazan and Pomi Casalmaggiore. It was quite a shock back then, and there were many rumors that the player had to skip the F4 as she still had traces of meldonium in her body. The official info was that she suffered food poisoning…

I would not trust Bruno Voluch….if he knows so much why dont he post the 10 names??