SRB M: Grbić – „Burden that we put on ourselves before Eurovolley was too heavy“

Serbia’s National Team missed their chance to qualify for the 2016 Summer Olympics in Rio de Janeiro as they didn’t participate at the 2015 World Cup and were eliminated in the quarterfinals of the 2015 Eurovolley. Now, Serbia will have to find their chance through additional qualifications in Berlin (Germany), in January 2016. 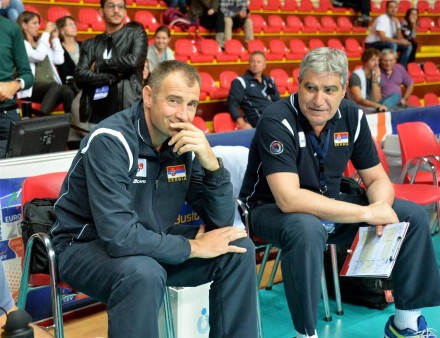 „After winning silver medal in the World League, the burden that we put on ourselves was too heavy. After beating Estonia in playoffs at Eurovolley, we lacked strength to confront France, which deservingly became European champions. I’m not disappointed by defeats from the teams like Russia and France, those were acceptable, but I’m disappointed because we struggled against Slovakia and Estonia. They showed us that we missed the energy we had in the World League when we took silver medal,“ Nikola Grbić, the head coach of Serbia stated.

„We won’t have much time to prepare for the 2016 Rio Qualifying Tournament, but other national teams will have the same problem, too. Our pool is tough with the hosts Germany and world champions Poland. Eurovolley showed us that there are no easy opponents and that we will have to be totally focused from start to finish of each game in order to make good result. Our mutual desire is to go to Rio and we will do our best in Berlin to be among the best three teams. We own quality, we can be optimistic and we will secure visa for Rio!“ legendary setter at helm of Serbia’s NT added.