In what was a memorable day for Turkey’s Volleyball family in the European Cups, Vakifbank ISTANBUL advanced to the Playoffs 6 of the 2013 CEV Volleyball Champions League after routing Poland’s Atom Trefl SOPOT in straight sets (25-19, 25-23, and 25-16) to play there a double derby against the compatriots of Eczacibasi VitrA ISTANBUL. This and other volleyball news read on Worldofvolley.com. 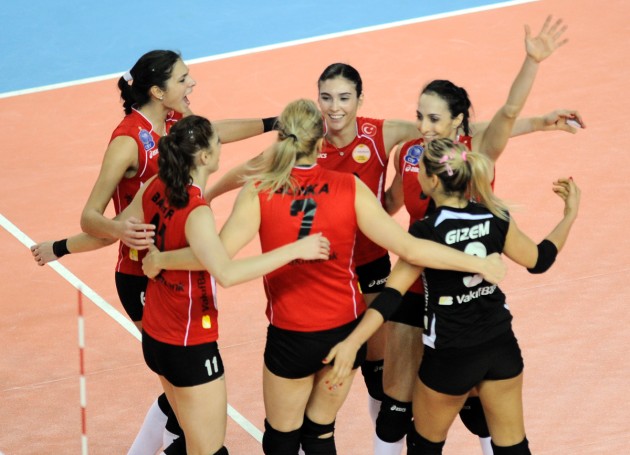 With 1’555 spectators in attendance, Vakifbank started out by making some mistakes while their opponents responded with solid blocks. However, the hosts gradually found their game and via Serbia’s Jovana Brakocevic they moved to the front with a solid margin by the second technical time-out (16:10). Atom Trefl head coach Adam Grabowski stopped the game twice as his side trailed 12:19 and 15:22, but Vakifbank did not lose composure and rapidly sailed to the final 25-19.

After a good start by Atom Trefl in set 2 (5:8), youngster Polen Uslupehlivan joined the game and she helped Vakifbank storm back to level the score at 12 all. Vakifbank got a margin of three by the second technical time-out but some mistakes helped SOPOT fight back to 18 all. A very close and dramatic final rush followed until another deuce at 23, before two errors by the guests sealed the final 25-23 for Vakifbank.

Once more Atom Trefl started out quite aggressively also in set 3 (7:8) but the hosts responded well and got to the front by four points at the second technical time-out. They did not lose control of the operations anymore and stormed to the 25-16 that sealed a well-deserved 3:0 win, where Malgorzata Glinka-Mogentale top scored with 13 points for the home side.

“We are happy for having made it to the next round but it is a pity that one of the best teams in Europe won’t make it to the final four” said Vakifbank head coach Giovanni Guidetti.
“As we found consistency with our serve and block, we played better. The next round against Eczacibasi will certainly be much tougher than this double fixture with SOPOT” stresses Vakifbank team captain Gözde Sonsirma Kirdar.

“Vakifbank is definitely stronger than us. Their attacks were better and their block higher. These were the key points that determined the outcome of the game” said SOPOT mentor Grabowski.

“I think Vakifbank is the best team in Europe. We lost some easy points even though we did not play too bad. Our defense was not as good as we had expected before the match” concluded the team captain of Atom Trefl, Izabela Belcik.