Turkey claimed their first win in the prelim Pool C of the 2013 CEV Volleyball European League – Menby seeing off Belarus 3:1. The first set was very one-sided with Turkey dominating the scene paced by Mustafa Koc and Metin Toy. 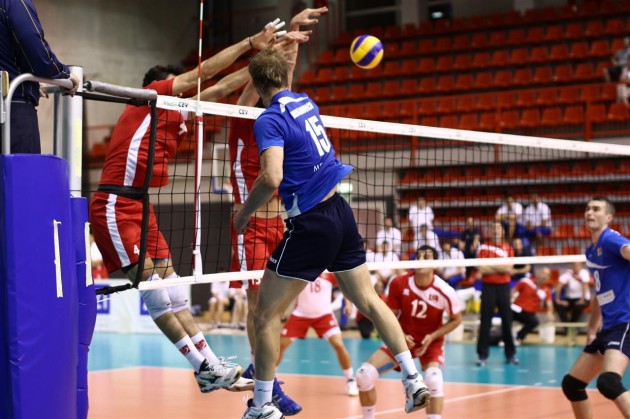 The first set was very one-sided with Turkey dominating the scene paced by Mustafa Koc and Metin Toy. Turkey went up 9:16 and 17:11 but Belarus fought their way back reducing the gap to one point before the guys in red jerseys closed it out at 21-19.

The second set followed a similar plot with Turkey setting the pace of the game in the early phases but Belarus almost evened the score (13:12) halfway through. However, after scoring three points in a row, the hosts of this year’s final four could get back control of the game and go for the 2:0 (21-17).

The situation changed in set 3 where Belarus served extremely well and after a dramatic final rush (18:18), could bring it home at 19-21. A very close fight unfolded in the fourth set (9:9) before Turkey pulled out a terrific series of blocks and serves to finish it off at 21-14 with Metin Toy registering 25 points in the end.