Team USA kept up a strong attack at the net and held off a second-set rally by France as it defeated the European side, 25-15, 29-27, 25-16 on Friday in an FIVB World League match at the Tulsa Convention Center Arena. Matt Anderson, who was named Player of the Match, led all scorers with 22 points on 17 kills, three blocks and two aces. Max Holt and Carson Clark each scored 13 points. 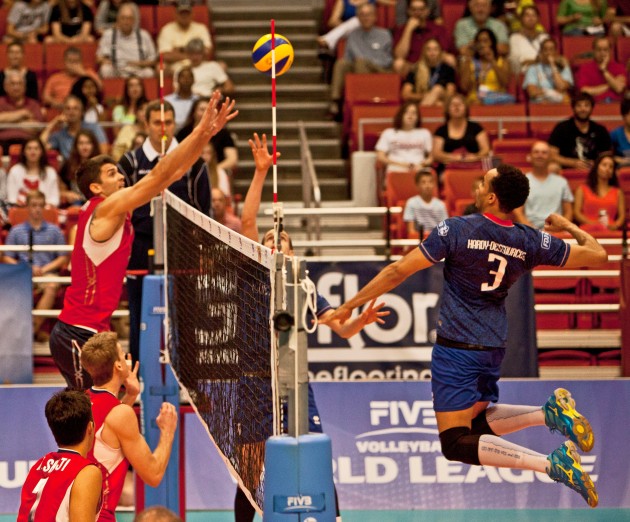 The United States (2-1) and France (0-3) will play their second match on Saturday.

Matt Anderson, who was named Player of the Match, led all scorers with 22 points on 17 kills, three blocks and two aces. Max Holt and Carson Clark each scored 13 points.

With the score tied 4-4, the USA scored on two straight blocks to take the lead. Team USA led 8-5 at the first technical timeout (TTO). After the break and a France kill from Gerald Hardy-Dessources, the U.S. came back with an Anderson kill and Holt block to lead 11-6 and France called timeout. The U.S. kept up the pressure and led 16-12 at the second TTO. With the U.S. leading 17-14, Russell Holmes took the serve on a Holt block and served for five straight points, including an ace, to give the USA the 22-13 advantage. Team USA went on to win 25-15. Holt led all scorers with six points on one kill and five blocks.

With the European side deflated, The U.S. took a 9-2 lead to open the third set and France never threatened. The United States led 16-10 at the second TTO and eased its way to a 25-16 victory.