The countdown has started in Turkey as Ankara and Izmir will be hosting from August 22 through September 1 the 2013 FIVB Men’s U21 World Championship. The Baskent Volleyball Hall in Ankara will host the matches of Pool A and B while Ataturk Sports Hall in Izmir will welcome the teams assigned to Pool C and D. 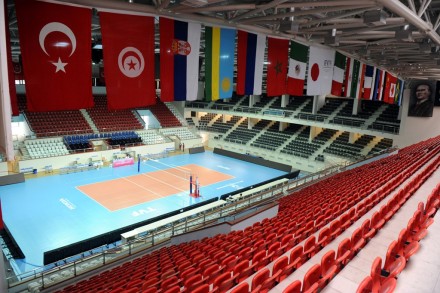 The venues were inspected on Monday and everything is ready for a memorable Championship. Turkey played host to the FIVB Girls’ U18 World Championship two years ago with the local heroines winning the first gold medal for their country and this time 20 teams will be battling for the medals as some of the world’s up-and-coming stars are set to showcase their skills and potential in Ankara and Izmir.

Hosts Turkey were drawn in Pool A together with China, Egypt, India, and Morocco while 2012 European champions Italy were assigned to Pool D to play there Russia, France, Brazil, and Venezuela. Two more teams will be carrying Europe’s hopes in Ankara and Izmir, with Estonia – the major sensation of the European qualifiers held this past May – starring in Pool B together with Argentina, Iran, Japan and Mexico while Serbia will be playing in Pool C alongside USA, Tunisia, Canada, and Rwanda.

Followed this competition on our section Junior World Championship 2013 M.