Spain is kicking off with Germany at the European Championship in Germany and Switzerland (6th to 14th September) on 6th September. The Spanish players are considered as outsiders in pool A with teams like Germany, Netherlands and Turkey. The former setter and Olympic participant (Barcelona 1992) led his team through the qualification against Slovakia, Israel and Sweden. The 51 years old Hervas assess the opponents as really strong “but we want to resist with our team strength and fighting spirit” he says in the interview. 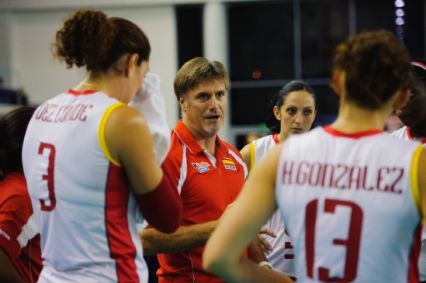 What have you first thought as it was certain that Spain has been drawn in group A to Germany, Turkey and the Netherlands?

“It is a very hard group. I didn’t like it too much at first, but this is the European Championship and nobody has an easy draw.“

With a little distance, how do you estimate this group?

“It will be very tough, very competitive and very fun to play.”

What do you know about your three opponents in the preliminary round?

“They are first level teams. They have been playing top volleyball for many years now. However, we think that we know how they play and the question will be how good we can play against them.”

In Germany we don’t know much about the Spanish Women volleyball. What can you reveal about it?

“We can play good volleyball. We work hard in every game, and we may lose but never without a good fight.”

Your team is a mix about experienced and young players. Where do you see your team’s strengths and where is still potential?

“Our strength is definitively in our team. We do not have a superstar but in contrast, we help each other and fight hard in every ball.”

How does your direct preparation for the EC look like, against whom (and when) do you play test matches?

“We will not have a long preparation, unfortunately. Due to the economical situation in Spain, we will only play a friendly tournament against Belgium.”

Is it an advantage that your team competes against host Germany on the first match day?

“You never know, it can go either way. We will try to enjoy this game as much as we can and then we will see what happens.”

What is your and your team’s goal at the EC?

“Our goals for this tournament are to play good matches and enjoy the competition.”

In 2007 the Spanish men sensationally celebrated their win of the EC title. Is this also possible for the Spanish women? And if not yet in 2013, perhaps in the future?

“The 2007 title was a great success for Spanish Volleyball. Perhaps right now it will be not the best time to repeat it but we will definitively give our best in every game.”