First leg of Pan American Cup held in Mexico City, was over last night. As expected Mexico, USA and Brazil got wins but what nobody expected was a very tight and exciting match between USA and Dominican Republic which ended with a 3-2 score. 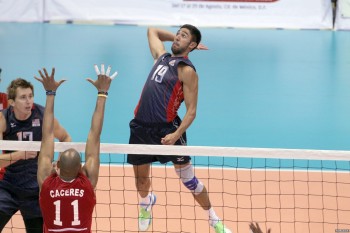 The Americans dominated the first two sets, but the team coached by Osiel Vázquez came back in the third and fourth sets thanks to the work of Elvis Contreras, Wilfrido Hernández and José Miguel Cáceres, who scored 22, 11 and 10 points.

However United States’ Taylor Sander and Jacek Ratajczak were keys for the American victory in the fifth set and finished with 19 and 14 points.

Tomas Aguilera was the leading scorer for the winners with a total of 14 points while Jesus Valdes registered 8 for Mexico. On the Trinidadian side, captain Nolan Tash and Simon Blake scored 5 each.

Renan Zanatta Buiatti finished as scoring leader for Brazil with a total of 13 points, while Ulises Maldonado scored 11 for the Puerto Ricans.

The Brazilian squad arrived to Mexico City with a group of U23 players and only four veterans.