Arrival of Trentino’s stars and Radostin Stoychev in Haklbank certainly helped Turkish league to become one of the best leagues in the world. Still all those stars weren’t enough to beat old school team like Fenerbahce Grundig with Miljkovic, Fonteles and Marshal in squad. Many who already had Halbank’s name written as champions, will now think twice. 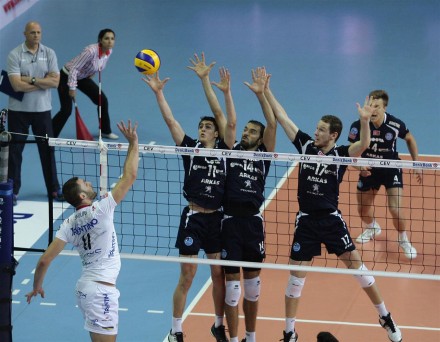 Saturday is the day all six games of the sixth round will be played.

Fener is expected to destroy Konak in a very convincing fashion. Genclik and Belediye Plevne will play the outsiders derby as none of these teams yet recorded a single win.

In another potential blowout, Ziraat Bankasi will host Cankaya in a David and Goliath battle. Ziraat has all three wins with maximum of 9 points, while Cankaya has one point and no wins.

Underachieving Galatasaray will host Maliye Piyango in a close call match. Maliye Piango lost two important players this season – Vemic and Ivovic and are struggling to fill their place. Juantorena and company of Halkbank will go to Inegol’s hall and try to make up for the last week’s loss versus Fenerbahce.

Istanbull BBSK started season very well with wins in Europe as well in Turkey. Only loss came versus Halbank in the second round and will try to damage Arkas’ shaken squad after their defeat in CL. Defending champions are playing bad in Champions League, with all three losses chances of them going through playoffs are minimal and Glenn Hoag will have to concentrate on the Turkish championship instead.